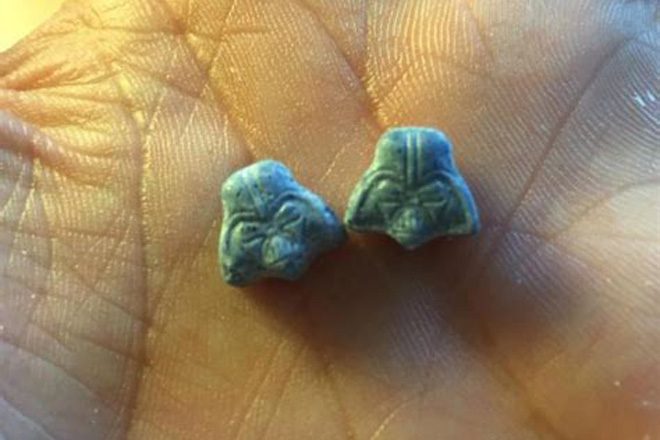 Warning has been issued over dangerous blue ‘Darth Vader’ ecstasy pills! The powerful pill is an explosive mix of MDMA ketamine and cocaine and can pose a significant risk to users.

The blue ecstasy pills are shaped like the Star Wars villain and have been labelled as a high risk by police. According to authorities, three teenagers and one adult have died in the last month and 14-year-old boy is suffering from kidney failure after he ingested half of a pill.

Exeter Police believe these dangerous ecstasy pills are being bought on the dark web and has called on parents to be mindful of their children.

Speaking on behalf of the force, Detective Constable Chris Empson of Devon and Cornwall Police said:

“This is not just really experienced cyber criminals, we are looking at teenagers who are looking at this tech for their own gain and this technology removes the physical barriers to crime in the future because they can do it in the comfort of their own bedrooms.

“This is a new threat that we are facing” he added.

Please share! We have had lots of reports of youngsters taking this drug ‘darthvader’ and falling ill/ unconscious. It is a dangerous mix of MDMA, ketamine and cocaine. There is no safe dosage and you risk your life if you take it. Supt TD. @NDJournal @ndgazette @NorthDevonNews pic.twitter.com/oujvKWArfw

Exeter Neighbourhood Team are concerned children are using Darth Vader brought on the dark web with fatal consequences. Please ensure you know where your child is and teach them about the risks of drug use. Ps 2631 Storey-Barrett https://t.co/kXz9HPzfCe pic.twitter.com/H26EHixaOh