“Pulse”, a LGBT nightclub in Orlando was just recently subject to gunfire, with the gunman barricading themselves in the building with multiple hostages, killing approximately 50 and injuring at least 53.

The club based in Orlando, was hosting it’s Latino night to an attendance of 100 when the shots were fired. On their official Facebook page they advised people to flee quickly from the danger.

“We just heard shots, it was less than a minute, it felt longer,” Ricardo Negron said. “There was a brief pause and we just ran. Everybody was just faces to the floor. I had someone over me, I really didn’t see [how many gunmen there were]. All I can tell you was the club was packed, there were over 100 people there.”

According to chief John Mina, he began shooting shortly after 2 a.m. An officer working at the nightclub exchanged shots with the suspect outside the club. Following that exchange, the gunman went inside Pulse and opened fire.

He subsequently held those remaining in the club hostage. At 5 a.m, authorities made the decision to enter the “Pulse” club, at which point SWAT teams exchanged further gunfire with the suspect and killed him.

According to Mina, the gunman was carrying an assault rifle and a handgun, as well as a “type of device” that may have been explosive in nature. 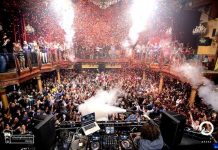