This just in from the twitter sphere: Dark tempo goddess REZZ and jazzy DJ/producer GRiZ might be teaming up for what could be a strange, but awesome collaboration!

Speculation about this began after GRiZ tweeted at REZZ, who “had a huge favor” to ask her, and then stated that he had a “thing” he wanted to send her to take a look at (new track perhaps?) GRiZ then goes on to state, “it’s not exactly what you might expect and maybe I’m crazy but you can be the judge lolol”

Whatever these two are planning, fingers crossed that we get so hear some amazingly weird and funky mixes from them in the near future!

Read their conversation below:

Yo @OfficialRezz I have a huge favor to ask 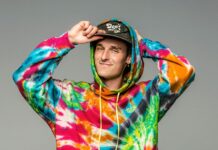