Just when you thought you had seen it all, a wook comes in and proves you wrong.

The wook in question, whose identity remains a mystery, apparently thought it would be a great idea to just set up a portable stove and start grilling some steaks right in the middle of the crowd, at the height of Bassnectar‘s set during Electric Forest Weekend 1.

Even with wooks being stereotyped as being dirty and careless, this act of wookishness still surprised many festival goers also present at the Electric Forest that weekend. People were so appalled by his behavior that they took pictures of it, which you can see below. 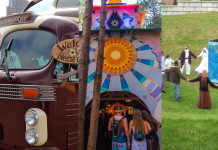