In response to the 23 reports of sexual assault and four cases of rape at Bråvalla, Sweden’s largest music festival, organizers announced the cancellation of next year’s event and a possible “man-free” festival that might take its place.

Emma Knyckare, a Swedish radio presenter and comedian, says she plans to organize a festival where only women are allowed. She took to Twitter to reiterate her motives, stating the proposed festival would take place “until ALL men have learned how to behave.”

Knyckare later confirmed on Instagram that she would be bringing together “a solid group of talented organizers and project leaders” in order achieve her end goal of a women-only event.

Police in the Southeastern District of Ostergotland confirmed that all four rapes and 23 sexual assaults occurred on the Bråvalla festival grounds throughout the four-day event. Unfortunately, this isn’t the first year this has happened. Similar assaults were reported at last year’s event, as well as other music festivals around Sweden.

Prime Minister Stefan Lofven, told the Swedish Daily Expressen that he’s calling for stronger festival surveillance and emphasizes his disgust towards the appalling amount of assaults.

“This is so disgusting,” said Lofven. “These are obnoxious acts by deplorable men. This must stop.”

Mumford & Sons, one of last year’s headliners, Tweeted in response to the reported offenses, making it clear they will not be performing at the festival again until female safety is guaranteed.

We’re appalled to hear what happened at the Bravalla Festival last weekend. https://t.co/QZGLZO6Lu2

Not only have these crimes scared artists away, but they’re also to blame for the drop in ticket sales. In 2016, Bråvalla hosted more than 52 thousand people, however, this year they only drew in around 45 thousand.

Police and authorities continue to investigate all crimes reported at Bråvalla, however, suspects have yet to be identified. 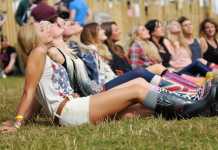 Sweden to have women only music festival after numerous reports of sexual assault !