Having welcomed over 120,000 festival-goers from 148 countries this July, one of the Europe’s top EDM festivals now looks back at an incredible weeklong schedule of events set across five picturesque locations, with its stunning ‘Memories’ video.

Shot at multiple locations in Split, Hvar, Vis and Braç, the evocative production demonstrates the beauty and sheer magnitude of the Destination Ultra experience, as it showcases fans from all over the world enjoying performances from over 140 electronic dance music artists across one memorable week.

Tiësto, Armin van Buuren and Hardwell closed the ULTRA Main Stage each night while Seth Troxler b2b The Martinez Brothers, Carl Cox and Sasha & John Digweed among many others rocked proceedings on the RESISTANCE stage. From the subsequent Yacht Regatta on the island of Brač to the 5000-strong Ultra Beach pool party in Hvar, Destination was capped off in style by Sasha b2b Nic Fanciulli at the ancient Fort George on Vis.

Off the back of a memorable fifth anniversary in 2016, ULTRA Europe will return to Croatia for its sixth annual edition on 6-8 July 2018.

Ticket registration for Ultra Europe 2018 is now open, exclusively at ultraeurope.com
Early Bird and Advanced tickets, which will be released soon and allocated on a first-come-first-served basis, will only be available to those fans that register in advance. 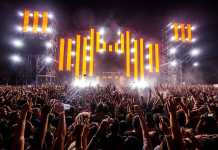