Insomniac today announced the return of Electric Daisy Carnival (EDC) Mexico, the largest music event the country has ever seen.

The 5th annual festival will return to the expansive Autódromo Hermanos Rodríguez in Mexico City for two incredible nights on Saturday, February 24 and Sunday, February 25, 2018, where fans will experience new stage designs, superstar artists, and plenty of surprises for the most memorable EDC Mexico yet.

An all-new circuitGROUNDS stage will make its EDC Mexico 2018 premiere as the second largest stage at the festival, spanning over 200 feet wide. This massive production will offer a one-of-a-kind experience that will immerse thousands of Headliners in its massive digital visuals, laser light shows, and industry-leading sound system. 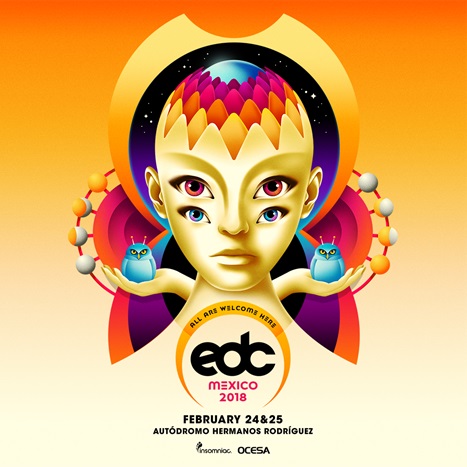 The beloved festival is expected to unite a record-shattering 200,000 festival-goers from around the world, offering attendees a massive playground packed with towering art installations, colorful carnival rides and an incredible community of accepting music lovers that can only be found at EDC. Featuring out of this world special effects, charming costumed performers, and world-renowned dance music acts, EDC Mexico 2018 will be bigger than ever before.

Over the past five years, EDC Mexico has become a destination getaway, allowing an international community of Headliners to connect while participating in the beautiful and vibrant culture of Mexico City.

Stage takeovers by massively popular brands Bassrush and Basscon had revelers dancing to the best sounds in bass and hardstyle all weekend. For this special anniversary, EDC Mexico 2018 is sure to deliver new immersive experiences along with a lineup of the most influential acts in dance music today.