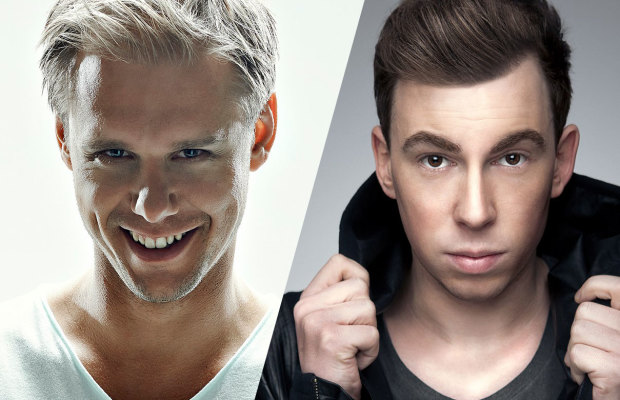 Amsterdam Dance Event‘s (ADE) world’s largest dance festival, has announced a special, one-off B2B performance from none other than Trance legend Armin van Buuren and Hardwell for its 5th anniversary on October 21.

The two superstar DJs revealed the news on the balcony of the Hotel Krasnapolsky Amsterdam, as they treated their die hard fans to a spectacular surprise show, which was broadcast live on screens across the city of Amsterdam, on both artists’ social media channels and across several global media outlets.

The pop-up captivated audiences both domestic and worldwide, with thousands of observers witnessing the performance in Dam Square and over 3 million viewers tuning in through the screens across Amsterdam and via social media live streams.

This year’s edition of Amsterdam Music Festival – AMF, is themed ‘We Own The Night‘ and marks the festival’s fifth anniversary. Introducing the ‘Two is One’ element, this edition will see the two world-class DJs join forces for one night only. As two of the world’s most celebrated names in electronic dance music, Armin van Buuren and Hardwell have both been named the world’s #1 DJ in the DJ Mag Top 100 multiple times, and are gearing up to make their debut performance one for the history books.

In addition to Armin van Buuren and Hardwell‘s Two is One act, AMF will also feature performances by other superstar Djs such as David Guetta, Dimitri Vegas & Like Mike, Marshmello, Don Diablo, Lucas & Steve, Vini Vici and Yellow Claw, and is destined to be one of the dance music highlights of 2017.