The annual homecoming of Belgium’s best loved EDM DJ duo Dimitri Vegas & Like Mike opened with a triumphant return for the brothers!

Somehow managing to go one step further than last year’s spectacle, the 2017 edition of their colossal ‘Bringing The Madness’ arena show is undoubtedly bigger, bolder and more insane than any show they’ve yet to perform indoors!

Following 2 sold-out gigs last weekend the brothers have decided to broadcast the shenanigans of this weekend’s party with an official livestream beaming the show to millions of fans around the world. 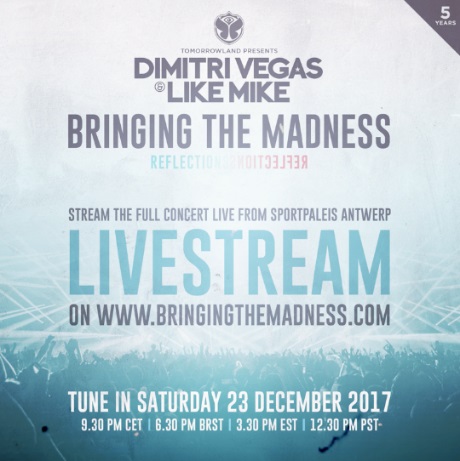 A host of global FM partners will livestream this years ‘Bringing The Madness‘ spectacle capturing the full show for fans listening pleasure. The airwaves of official partners such as Sirius XM in the USA, Paradise in Brazil, Future Sounds in Japan, Sunshine Live in Germany, Dance FM from Dubai and Indian Radio One, as well as native TV hosts in Belgium Q2 and PlugRTL will all join in the gargantuan end of year celebrations of ‘Bringing The Madness’!

Tune into the official ‘Bringing The Madness’ livestream here.