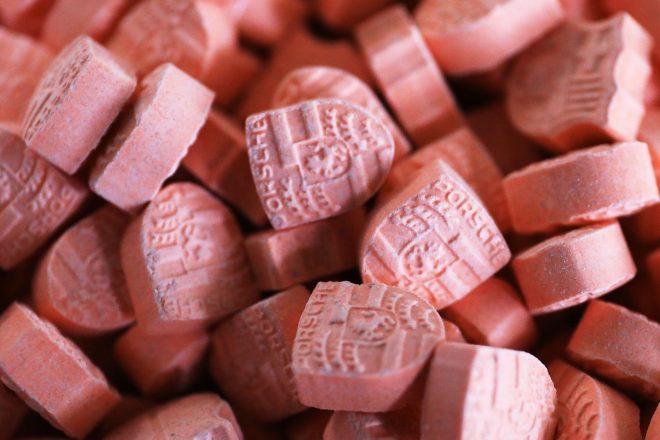 Ms Allison says that in the past, most people who took what they believed was ecstasy were actually not taking MDMA. In KnowYourStuffNZ‘s first year, just 20 percent of the drugs they tested actually contained MDMA.

But recently it’s making a comeback – last year 75% of MDMA samples were what people thought they were. In another new development, they’ve seen significantly more pressed pills compared to crystals in capsules. And some appear to contain multiple doses of MDMA.

“This season we’ve seen several pills weighing up to 580mg in which the main ingredient is MDMA, suggesting potentially two to three times the average dose,” Ms Allison wrote.

Specifically with regards to “Pink Porsches”, those who have ingested it have reported unpleasant experiences and testing these suggests they may contain “dangerous pharmaceutical agents” as well as a high dose of MDMA.

Ms Allison is calling for pill testing at events to be made “explicitly legal”, as the practice’s legality is currently something of a grey area.

“If the aim really is to reduce harm, the Government needs to acknowledge that people use drugs, end prohibition and the associated illicit markets, and create regulation that includes quality control and labelling, just as we have with legal drugs such as alcohol and coffee,” she wrote.

No drug use is completely safe, however we recognise that some people are willing to take risks to have a good time. To reduce the risk:

Remember a quarter of MDMA is not as presumed. You can’t tell just by looking. Test before you ingest.

There are high-dose MDMA pills out there – one pill is not necessarily one dose.