Dutch EDM DJ and producer, Don Diablo is back with his first single of 2018 – and another sure-fire hit – ‘People Say’ ft. Paige. Released via his very own Hexagon imprint, ‘People Say’ further demonstrates Don’s ability to turn his hand to any genre.

Starting life as a separate project last year, the evolved track layers a deep, hypnotic bassline, spiralling synths and a trap inspired drop with the addition of Paije’s rich vocals taking the tune to the next level.

“I got asked to write something for the score of a science fiction film last year. The first thing I came up with was this futuristic instrumental that was a bit of a departure from my normal sound, but I loved it so much that I kept it for my own project and turned it into PEOPLE SAY.

The upcoming album is all about pushing things forward, sonically and musically, taking things into the FUTURE in the broadest sense of the word. It’s been a fan favourite ever since I dropped it live for the first time and I am excited to show a different side of myself as a producer and artist. 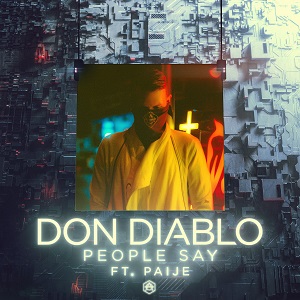 It was great working with the talented Paije on vocals, he really took the song to the next level and brings across the message loud and clear: always stay true to yourself…no matter what the PEOPLE SAY.”

‘People Say’ is the fourth single to be taken from his much-anticipated artist album ‘Future’ – set for release early next month.