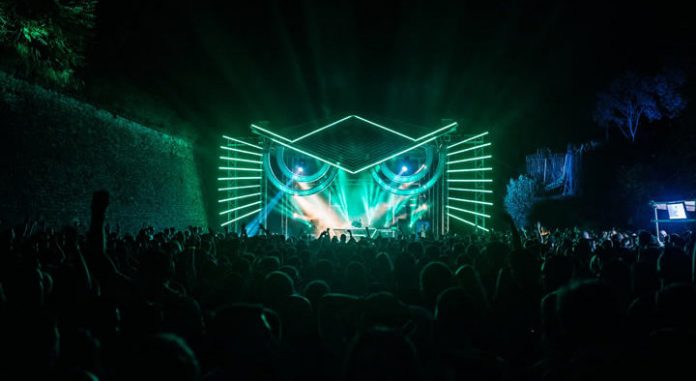 After EXIT Festival announced most of the “All-Star” line-up for its infamous stage Dance Arena, including Nina Kraviz, Maceo Plex, Solomun, Richie Hawtin, Adam Beyer & Ida Engberg, Amelie Lens, Ben Klock and many others, the time has come for the No Sleep Novi Sad stage to step in!

The deep trench behind the Arena and the most far out (in many ways) point of the acclaimed Serbian festival is considered by many to be a festival in its own right. 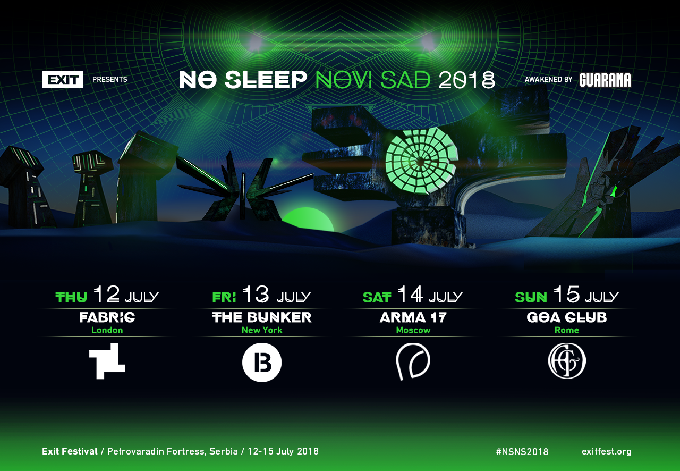 At the very start of four sleepless nights, on Thursday, July 12, comes Lego, a future star from Stockholm, from the respectable Parabel label, as well as Blackhall & Bookless, a British duo well-known for their decade-long run of Jaunt parties. Serbian internationaly praised DJ star Tijana T will also join them on the bill of London’s fabric, and this Faringdon-to-Petrovaradin journey will be continued by the brilliant producer Midland, whose FABRICLIVE 94 mix album is still fresh off the shelf.

Just like Saturdays in Fabric, this night at Exit is unthinkable without their famous resident DJ and author of their first mixed CD, Craig Richards, whose early morning b2b sets with Nicolas Lutz are the stuff of London legends. The bill is lead by one of fabric’s most talked about regulars Daniel Avery, perhaps the foremost DJ star of London’s next generation whose much awaited album arrives this Friday! He will take on the closing b2b set together with his Berlin peer behind the mighty Dystopian label, the global techno hero Rødhåd!

On Friday, July 13, a special concert made for Exit, will kick off the No Sleep Novi Sad stage, done by Serbian composer Svetlana Maraš, director of the Electronic studio of Radio Belgrade, whose works have been heard at festivals from Berlin to New York. This will be a perfect opening for the famous Brooklyn collective The Bunker, whose line up at EXIT includes a guest from Detroit, the techno heroine Erika, as well as one of the most fascinating “live techno” artists – Tin Man!

Still, what insured the international status of Bunker as a truly underground outlet marking its 15th anniversary this year, are their top-notch resident DJs. The super-experienced veteran of the American scene, Patrick Russell, will set the tone and tempo of the night, while the real DJ hypnotist and musical fanatic Eric Cloutier will take the darkest part of the night, the one just before it dawns. First rays of the sun will greet Bryan Kasenic, the legendary founder of The Bunker, whose lineage can be traced to Exit’s own part of the world, while the final set will be taken by the true Detroit heavyweight with a New York address – Mike Servito!

Saturday, July 14, sees the stage moving East, with the most important Russian art collective of today – Moscow’s Arma 17. The team behind the best known Moscow’s club and record label, with festivals and events all around the world will be welcomed by No Sleep own resident DJs, Sloxxx and Klaus. They will be relieved by one of the Arma’s best international transplants Julia Govor, who originated from Moscow’s core scene and nowadays lives in New York.

Another super-exciting live performance will be helmed by the Russian fantast and “one-man band”, Philipp Gorbachev, while the night-to-day transition will be painted by the Arma’s ideologist Natasha Abelle. The first morning set goes to the Russian rising techno star Nikita Zabelin, whose industrial sound of contemporary Moscow will be a true intro for the music finale. Just like the football one on the same weekend, it will be of historical proportions, because the inimitable Helena Hauff arrives to EXIT! Special guest of Arma and EXIT media declared to be “the best thing from Hamburg since the Beatles”, whose skills behind the decks rightfuly got her the Essential Mix of the Year 2017. Fully absent from social networks, credit cards of any gadgets, Helena Hauff travels the planet with authentic enthusiasm for the audience as the ultimate techno headliner of leading festivals and clubs.

Sunday is always reserved for the finale, and the Italians know how to win it even with the toughest of competition! In order to level the field with all nights before, the Eternal city’s most beloved club Goa, will be sending their first team, with the guest starring offensive duo and the captain who plays as if it was a matter of “life and death”, pun intended! First to reach the pitch is Fabrizio Sala, a microhouser in charge of best warm ups and longest after parties, followed by three true Roman stars: Silvie Loto, a regular at leading Ibiza parties, Adiel, the tribalic voodoo dancer of the new Italian techno scene, and DJ Red, the alter ego of Simona Calvani, one of the techno symbols and 20-year long resident of Ultrabeat parties at Goa club.

High precision game in the middle of the night shall come from the great “noir” hypnotist Giorgio Gigli, bard of the Roman techno scene and the mainstay of beloved labels such as “Elettronica Romana”, “Zooloft”, “Prologue” and “Electric Deluxe”. After last summer’s magical morning set, the Israeli duo Red Axes returns to EXIT with new material from the upcoming album signed by one of the most influential labels of the decade, “Life & Death”. Its founder DJ Tennis is the captain of this fantastic lineup, and the former curator of Goa will have the honor to close this year’s No Sleep Novi Sad stage, which outgrew its format becoming a real festival within a much bigger, the EXIT.

After European tours, No Sleep crosses the Atlantic!
International success of EXIT Festival‘s stage can be characterized as meteoric, with media praises that proclaim it “the place where Exit’s lineup truly shines” or “only a few stages in the world can compare”!

At this custom designed, recognizable stage, EXIT partnered with some of the world’s most exciting clubs such as Concrete (Paris), Tresor (Berlin), Fuse (Brussels), Sub Club (Glasgow), Grelle Forelle (Vienna), Avant Garde (London), Nitsa (Barcelona), Salon des Amateurs (Dusseldorf) and 20/44 and Drugstore from Belgrade. The EXIT’s No Sleep launch parties have been thrown in these legendary clubs, and this year the warm up tour goes over the Atlantic!