After the multi-million-stream success of his previous releases – including the wildly fruitful melodies and raw vocals of ‘Crazy’ – DJ and producer, Lost Frequencies has returned with another definite dance music staple.

Drawing on his expansive electronic pallet and rare talent to pull in influence from outside the dance music spectrum, Lost Frequencies pays homage to country sounds by imbuing ‘Melody’ with melodic guitar strums and by twisting Blunt‘s soaring vocal into a unique loop come the chorus, which flows around the rhythm like a waterfall. 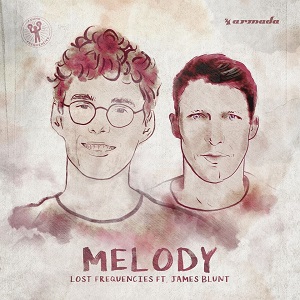 Spotlighting a stellar vocalist-producer fusion in this merger of disparate sounds that has grown into a beautifully individual record, Lost Frequencies said of the release:

“I’ve been a really big fan of James Blunt these past years; I love his voice and music. To make a track together is something I wouldn’t have even dreamed of a few years ago, but here we are. James sent me the demo he had of ‘Melody’ and I started working on it immediately.

I did a bunch of different versions of the track until the final version was made and everybody loved it. It was a fairly quick process considering we were both gone a lot on tour and doing a lot of other projects, and I’m super happy we found a version of the track where both our worlds are perfectly balanced.”

Equally excited with the union and its productive results, James Blunt said:

“I’d been in the studio writing with Steve Mac (co-writer/co-producer of Ed Sheeran’s ‘Shape Of You’) and Ammar Malik (co-writer of Maroon 5’s ‘Move Like Jagger’), and we wrote a song called ‘Hey, Melody’.

It didn’t quite fit my album, but I loved it, so when Lost Frequencies approached me asking to work together, I was thrilled – I was already a fan of his and really wanted the song to be heard. He plucked the chorus, worked his magic and made a great summer track out of it.”