With her latest solo offering ‘Fall’, Amba Shepherd adds her own perspective to a well-known Presets track, together with gifted producer Nick Thayer (OWSLA, Bloody Beetroots) and her breathtaking signature sound flows impeccably throughout the record.

With an ever-growing army of loyal supporters & a worldwide fan base that knows no musical boundaries, ‘Fall’ looks set to light up a multitude of global club floors & radio airwaves in the coming weeks – stay tuned.

You can listen and purchase the track HERE! 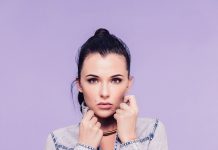