Seeing as both his sound and live sets are staples in the Ibiza club scene, it’s no wonder Armin van Buuren has decided to return to the White Isle with his latest ‘A State Of Trance’ mix album.

The fifth installment of the series and a wonderful addition to a summer season that saw Armin van Buuren head up his own Wednesday night summer residency at HÏ Ibiza, ‘A State Of Trance, Ibiza 2018’ strengthens both the Trance genre and the ASOT brand through forty-one sizzling productions in a two-part album ready to rock any electronic music fan’s world.

Selected and mixed by Armin van Buuren himself, the ‘A State Of Trance, Ibiza 2018’ mix album is composed of two parts: ‘On The Beach’ and ‘In The Club’. Through a phenomenal blend of mouthwatering exclusives, gorgeous originals, top-of-the-line remixes and three records from the Dutch Grammy nominee and electronic music icon himself (‘Blah Blah Blah’, ‘Our Origin’, ‘United’), the mix album captures every inch of the Ibiza magic and allows fans from all across the globe to experience the island’s thriving party scene at its best. 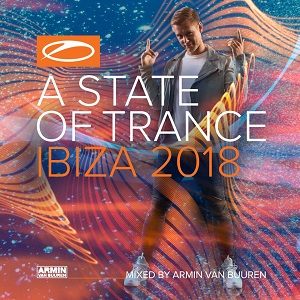 The A State Of Trance brand includes not only the award-winning radio show, but also the label, the event series and the A State Of Trance compilation series, which in turn includes the annual year mixes and other mix albums in addition to the Ibiza-themed installments.

The radio show is broadcast every week to an estimated 42 million listeners in more than a eighty different countries around the world, and has been pivotal in placing Trance music on the map and keeping it there.