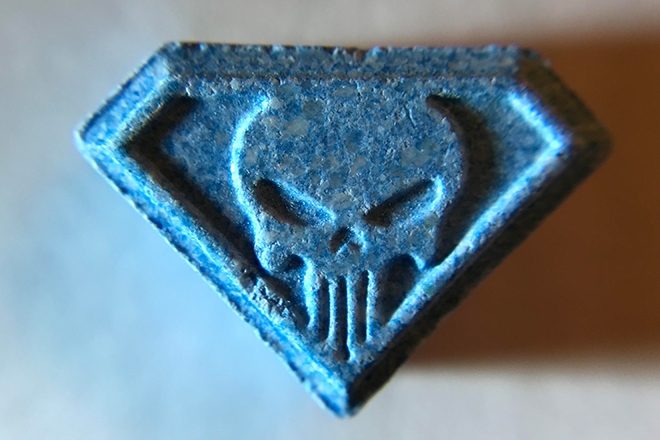 It seems as if a hazardous batch of Ecstasy pills are floating around the United Kingdom, and perhaps in other parts of the country as well. Police have issued a warning to the public stating that the “potentially lethal” pills that are circulating heavily in the Rhondda Region have the image of the fictional comic book character “The Punisher”.

While South Wales Police representatives are stating that the pills are dangerous, they are giving the reason for the danger being due to extremely high levels of MDMA, which have caused many people in the area to be hospitalized.

Often when bad batches of Ecstasy are reported it is due to harmful cutting agents and filler chemicals that wreak havoc on the consumer. These “Punisher” tablets are not tainted, they are just extraordinarily potent, too potent to be clear.

Experts say that a good rule of thumb to live by when taking Ecstasy tablets is to start with a small portion of the pill, and then consume accordingly.

While multiple admissions to local hospitals have been reported, a more serious circumstance involved a 21-year-old man that was admitted to the hospital in critical condition on December 17, 2018, where he stayed for about a week before being released.

A release from South Wales Police, DCI Tom Moore stated “You can never be sure what you are taking when you use illegal substances and the side-effects are unpredictable and potentially life-threatening. Anybody that takes these pills are gambling with their life.”

People just need to be aware of the potential dangers associated with taking chemicals. Step one, test it. Step two, do not take the whole tablet until potency has been determined.

You party people stay safe out there and do not forget to keep your friends and fellow dancing machines safe as well. Spread the word when dangerous chemicals are discovered and reported.