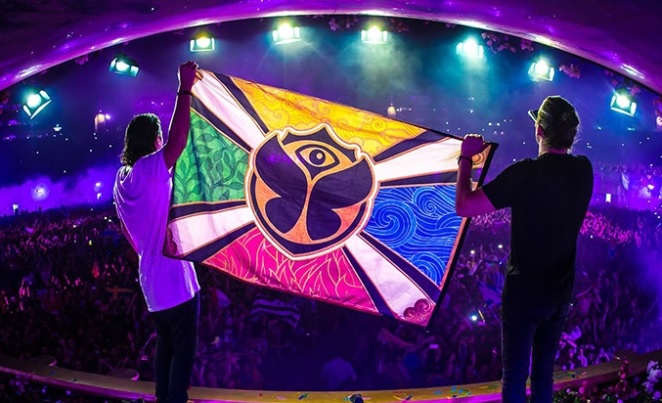 There was a gargantuan wave of musical mayhem emanating from Antwerp’s Sportpalais this December. Belgian superstar DJ duo Dimitri Vegas & Like Mike, in partnership with Tomorrowland festival, delivered the newest chapter in their annual homecoming shows with the winter edition of ‘Garden Of Madness’.

Scorching the ceilig of the near 20,000 capacity stadium with their roof-raising line-up accompanied by one of the most impressive stage concepts ever seen in the world of electronic music, and perhaps the music industry as a whole. ‘Garden Of Madness‘ delivered a spectacle across 4 sold-out nights giving fans, who had traveled from all over the world, a truly mesmerizing audio and visual feast.

Dimitri Vegas & Like Mike, alongside a range of special guests that included Armin van Buuren, Netsky, Nicky Romero, and Lil Kleine, illuminated buzzing music fans throughout the entire weekend’s proceedings with what many were calling the most insane event of the year!

As is ever the case with a show present by Tomorrowlandand  Dimitri Vegas & Like Mike, the level of surprises and musical magic was kept and maintained at a constant high ensuring that the atmosphere of each evening never failed to disappoint the up-for-it crowd.

The jaw-dropping new ‘Garden of Madness’ mainstage show, built by the award-winning, reality pushing hands of the  Tomorrowland production team, was a sight to behold with an array of visuals, Co2 cannons, pyrotechnics, special effects and much much more, wowing the insatiable crowd throughout the entire night.

An integral fixture at the Tomorrowland festival since 2014, ‘Garden Of Madness’ is a long-established concept which to date has also completed to full season-long residency at Ushuaïa Ibiza.

Watch the full live set of Tomorrowland presents Garden of Madness with Dimitri Vegas & Like Mike below.

Tomorrowland festival will expand to 3 weekends in 2022!