A deadly new drug known as ‘monkey dust’ is sweeping the Australian rave scene, leading to warnings from authorities. The drug, also referred to as bath salts or MDPV, is being sold across the nation’s music festivals and dancefloors in increasing numbers.

One report in Australia said that a woman who had taken MDPV ended up ‘licking the dance floor so feverishly her tongue bled’. At about £2 a hit, the synthetic substance ‘turns users into the Incredible Hulk’ and can leave them high for days on end.

Professor Nicole Lee, from Curtin University’s National Drug Research Institute in Perth, said the emergence of the party drug in Australia is alarming.

“It has some effects that are pretty similar to amphetamines and cocaine. If you take too much people can become a bit confused. In the longer term, there have been reports of paranoia and psychosis that are similar to ice – that seem to happen in a much shorter period of time. It’s not a drug we know heaps about.”

Users in Australia have been filmed jumping in front of cars and standing perilously on tall buildings because the drug makes them think they cannot be harmed.

MDPV is a psychoactive substance that can be “snorted, smoked, taken orally or injected” and its effects can kick in at low doses of 5-10mg. “It has quite a euphoric effect but is also very stimulating when taken at a very low dose,” Edith Cowan University senior lecturer in addiction Stephen Bright said.

Small dose of the drug give users an Ecstasy-style high, but larger doses leave users hallucinating and paranoid. One user on trip-report site Erowid said:

“It has been over 72 hours since I last dosed and I still feel crazy and out of control (mainly my eyes, I might be in control but I don’t trust myself). I’m scared to leave my room, even to go get food. I’m very scared and feel like I’ve gone crazy permanently.” 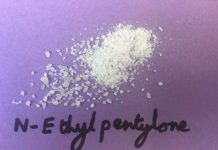