Allen & Heath have dub-stepped their way into the spotlight of the music equipment world with the release of the XONE:23C Professional Mixer and Internal SoundCard. The standout model was a winner of DJ Mag’s Tech Awards for Best DJ Mixer under 600 Euros in 2018, and it is a powerhouse device.

The slick and smooth user-friendly design is soft to the touch, but it does a whole lot more than just feel good and look pretty with its illuminated switches, backlit controls, light-piped meters, and sleek new design.

The potent mixer is attractive aesthetically, however, it is a powerful and high functioning tech device that is versatile in many ways. It is full of surprises, and it will expand the musical horizons for music professionals across the globe. The features included on the device are the same that are used in top-rated clubs across the globe. This is a prolific mixing device and it is every bit as potent as anything else on the market.

The potential is endless with the Xone:23C, the mixer has an impressive and cutting edge analog Voltage Control Filter that offers low-pass and high-pass filters, as well as frequency sweep, and “mild to wild” resonance control.

It also has the ability to tap-in to third-party FX units to connect loops that route back through the VCF. The filter alone makes it difficult for the competition to keep up with them, but that is just the starting point.

Is a revolutionary rendition of a conventional professional touring mixing device that has been spun into a compact and accessible format.

Another dynamic angle of the Xone:23C is the built-in 3 band total kill EQ, which allows the user the capability to artistically stop frequencies completely, and then bring them back into the mix with complete control.

All channels come equipped with the feature, and users have never had more hands control than with the Xone:23C, this device gives musicians the ability to intricately manage and control their sound.

Endless features mixed with the high operational professional performance makes for a state of the art device. There is not a better option for DJs and music producers abroad than the Xone:23C. For more information visit their official website! 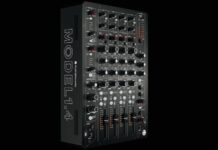