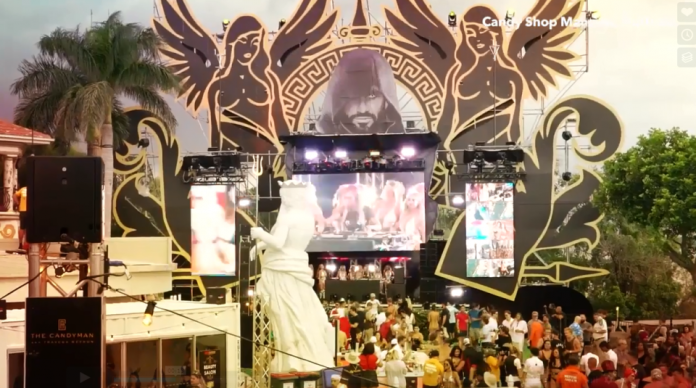 Some people talk the talk, while others walk the walk. A prime example of that fact is Travers Beynon, also infamously known globally as “the Candyman”. Beynon is a multi-millionaire that lives a lavish lifestyle and does not hide from the limelight. While he has risen to the top of the ranks of the business world, he is more wildly known for his extravagant lifestyle and sexy mansion parties that he frequently hosts on Australia’s Gold Coast.

At this year’s event, at the “Secret Society” themed extravaganza, Beynon hosted the event that was dubbed “The Largest House Party in the World”, where 1,200 people all funneled into his mansion in less than two hours. A flamboyant Candyman entrance set the tone for the evening where he arrived at the party busting through a cloud of smoke and landing on a floating stage that nested on the riverbank behind his luxurious home. He appeared to walk on water as he was surrounded by people doing stunts on jet skis and fly boards. The party is estimated to have cost over $1,000,000 AUD.

The Candyman is very open publicly about his life and is quick to express himself to members of the press. The devoted father of four is a very busy man, yet he has figured out the secret ingredient to the work, life play balance. It is not clear what that ingredient is, but whatever it allows him to live the life that he wants as a fitness buff, supercar collector, race car driver, managing director of an internationally acclaimed business, a loving husband, and with his wife’s consent a boyfriend to countless women that fit the supermodel mold.

Where polygamous relationships often face public scrutiny, the Candyman could care less about what anybody thinks about his lifestyle choices. Each night he sleeps with them altogether and claims that sex is the easy part of having intimate relationships with multiple partners.

It is no secret that he is a passionate lover that aims to satisfy his multiple partners, he stated that “what I am like in business, life, or sport, I am that in bed. They love my imagination and creativity, you need that when you have multiple girls.”

While speaking to the ladbible earlier last year, Beynon stated that “the world has changed, people are hating on me, are they saying that they are against same-sex marriage? Because I am no different. I am diverse, I am different. I live a different lifestyle and I do not think it can be any more different than two males or two females bringing up children”.

He integrated his children into his open partner lifestyle early in their life, and they all have adapted to it and fully accept it. It is no big deal to them, it is simply a fact of life in their world.

To shine a light on his events, Beynon takes to social media to highlight the lavish parties and naked women that are the general population of his events. He encourages his guests to let loose, forget about everyday life, and live in the moment. He likes to provoke open-mindedness and free thought and claims that “many women show up to the parties straight, but during the event and beyond they become bi-sexual. 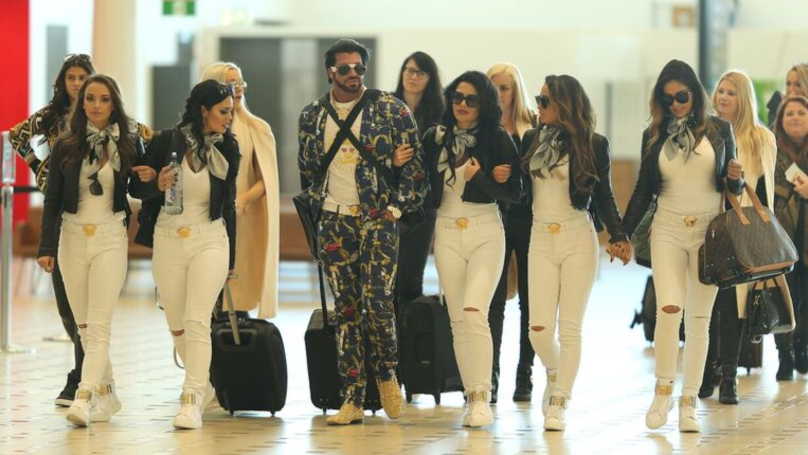 After his parties are over, the Candyman goes back to his normal yet unconventional life in “the real world”. He takes his work and home life serious as a husband, father, boyfriend, and multiple business owner.

He uses the annual parties as a chance to unwind and have a good time. Beynon seemingly is an eclectic mix of Hugh Hefner and Batman, regardless if a person loves him or hates him, it probably is completely irrelevant to him. It is not going to get in his way if one does not agree with his lifestyle. Either way, the person involved is probably an active follower on his social media sites anyway.