Jamie Jones and Paradise return to Ibiza’s iconic DC-10 this summer for ‘Colour Odyssey’ – a theme centred around lights and the entire colour spectrum. The 2019 edition promises to be the biggest yet, with 17 weeks of parties unveiled instead of the usual 15.

Following on from spring appearances at some of the world’s biggest electronic events, Paradise Ibiza sees Jones bring together expertly-curated line-ups featuring some of the most sough-after artists in dance music.

Running every Wednesday from June 12th to October 2nd, Paradise has added David Berrie to its list of residents for 2019, alongside established favourites such as Richy Ahmed and Patrick Topping. 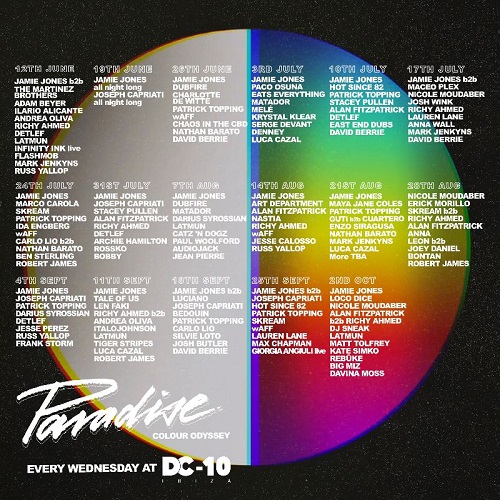 One of the most recognisable party brands on the White Isle, there are Paradise debut slots for Charlotte De Witte, East End Dubs, Archie Hamilton, Rossko, Nastia and Len Faki, while Chaos in the CBD, Krystal Klear, Anna Wall, Bobby and Big Miz will all play DC-10 for the first time.

Some of the most revered names in the underground will also play across the 17 weeks, including Joseph Capriati, Maceo Plex, Marco Carola, Giorgia Angiuli (who will be performing live) and Anna. As well as playing all night long on the terrace during week two, Jones will again partner with Luciano following their killer back-to-back at the recent Paradise Space Miami party.

As always, the season opener will kick off at the earlier time of 6pm, with Jones and The Martinez Brothers pencilled in for an extended back-to-back on the fabled DC-10 terrace. The final three parties, on 18th September, 25th September and 2nd October, will also feature garden sets with 6pm starts.

The run of parties will be preceded by Jones taking the Paradise brand worldwide, with Paradise in the Park taking place in Los Angeles on 1st June, ahead of a Paradise party in Barcelona on 16th June for Sonar Off Week.