On August 23 at 12:01 AM CEST, The Avicii estate will release “Heaven (David Guetta & MORTEN remix)” the long-rumored remix of the Avicii track from Tim Bergling’s album TIM, which reached 1.2 billion streams since its release in June.

Produced by Guetta to honor his friend’s life and legacy, it is the first Avicii/Guetta collaboration since the two produced “Sunshine” in 2011 and received a Grammy nomination for their work.

“I’ve wanted to do something to honor Avicii for quite a long time, but was waiting for the right moment. After I heard ‘Heaven’ for the first time I was blown away by the sound, the lyrics and the vocals from Chris Martin.

What makes it extra special is that Chris Martin has always been a big inspiration with Coldplay for both Tim and myself. That’s why it felt like the right moment for me to make a remix of this track as a tribute to Tim. 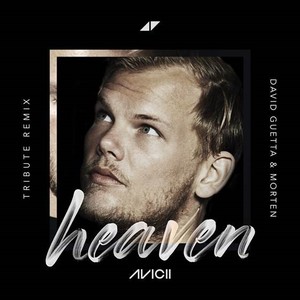 “I proposed it to the family and luckily they liked the idea. Together with my friend MORTEN I created this remix and I’m really proud of the end result. I think it’s amazing we can keep his legacy and his beautiful melodies alive like this, because he inspired so many people with it, including myself.”

“Heaven”, a collaboration written and recorded with Coldplay’s Chris Martin in 2014 and completed by Tim Bergling in 2016, is a brightly soaring anthem done in Avicii’s signature build-and-release style. It recently hit the #1 spot on Billboard’s Dance/Remix Airplay chart.

Guetta’s remix is a great combination of Avicii signature chords and the superstar French DJ’s sounds and compelling beats. Guetta debuted a live version of the track during his set at Tomorrowland, where Tiesto also performed a tribute to Bergling.

The video to “Heaven” created by filmmaker Levan Tsikurishvili, in festival competition this month won Best Music Video at LAFA (Los Angeles Film Awards) and at the Top Shorts Film Festival.The gorgeous combination of images of Bergling from Tsikurishvili’s and Bergling’s visit to Île Sainte-Marie in Madagascar in 2016 during the filming of Avicii: True Stories and a second visit that Tsikurishvili made after Tim’s death to honor his legacy.

Avicii proceeds will go to the non-profit Tim Bergling Foundation and the purposes it will work for, among other things, to prevent mental illness and suicide.

Watch the Tribute video below.