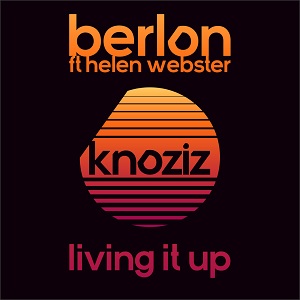 Introducing Berlon, as the international duo debut their collaboration on UK imprint, Knoziz Recordings. With a timeless house sound, ‘Living It Up’ touches down & sets out their musical agenda, in fitting style.

As ‘Living It Up‘ drops, Berlon deliver a summery House track with gorgeous vocals from Helen Webster & piano hook taking centre stage. Serving up an abundance of feel good vibes, the single also marks the debut release on London based label – Knoziz Recordings.

Berlon are Adam Graham and Willy Washington, two figures that have both made their own indelible mark on the industry. Adam‘s early background was in radio & his previous records have been signed to the likes of Slip-n-Slide & Ministry of Sound. While Willy‘s illustrious career has seen him penning songs for the likes of Mood II Swing, Michelle Weeks, My Digital Enemy, Ben Remember and Ultra Naté.

Fast forward to the present, the two now join forces on their cut ‘Living It Up‘ – set to ignite a host of club floors & radio airwaves.

The rest as they say, is (soon to be) history.