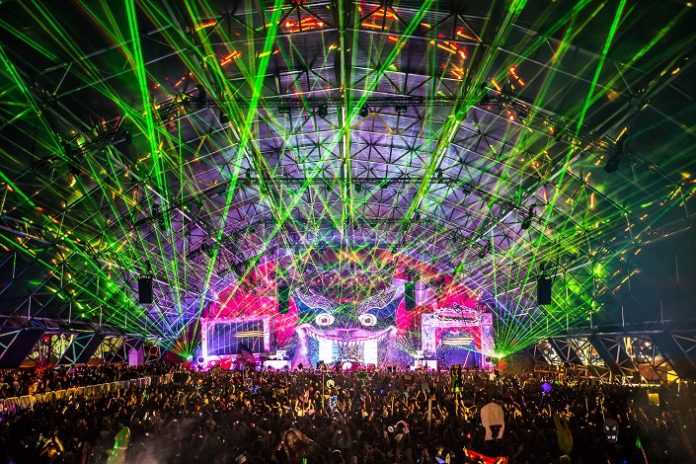 Insomniac announced the artist lineup for the world’s largest New Year’s Eve celebration across the West Coast – Countdown NYE 2019. Headliners will say goodbye to 2019 and hello to the new era of the roaring 20’s, for the sixth annual Countdown NYE party hosted at NOS Events Center in San Bernardino, CA.

For one night only, (Tuesday, Dec. 31), Headliners will blast off into the New Year during the iconic alien themed galaxy party and delve into their inner galactic selves where “All Are Welcome.” The out-of-this-world festival will celebrate the end to 2019 with a bang, at the euphoric celebration that will bring Headliners to an all-new galaxy paired with an unforgettable soundtrack.

Earthlings will enjoy a night filled with over 30 world-renowned dance music artists, including Alesso, Borgore, Galantis, and the first performance by The Chainsmokers at an Insomniac event since 2017.

Festivalgoers will ring in the New Year to must-see sets by Porter Robinson, Chris Lorenzo, SayMyName and more, across four mesmerizing extraterrestrial stages including, Mothership, Nebula, Area 51 and Twilight Zone.

The Twilight Zone, hosted by Bassrush, will be home to multiple Insomniac festival first timers including Metrik b2b Grafix, Eliminate, Blunts & Blondes, and the first VOYD performance from Svdden Death. 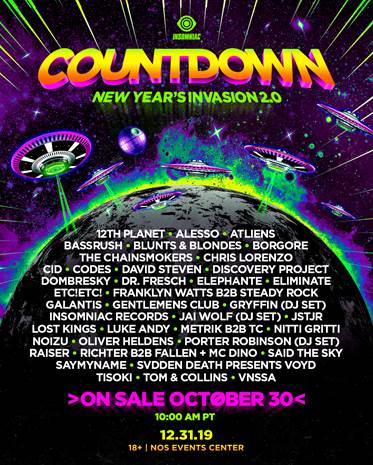 In 2018, Countdown welcomed Headliners to the NOS Events Center to celebrate the New Year with unforgettable moments and energy that was unparallel to any other event on the West Coast. Earthlings traveled through the magical utopia, complete with Aliens roaming the grounds and eye-catching production. The New Year’s Eve extravaganza included champagne toasts, confetti showers and heated seating areas to top off the perfect last night of the year.

Tickets to the hottest New Year’s Eve celebration will go on-sale on Wednesday, Oct. 30 at 10 a.m. PST via link.