The festival returns to London’s Boston Manor Park on 5th and 6th June 2020 with the Friday line-up representing Junction 2‘s commitment to diverse electronic music. At the heart of this is the genre-busting sound of Jon Hopkins. This will be his only full live performance in London next year and he’s going to be marrying his immersive, widescreen music with his stunning visual show.

Also on the bill for Friday, Junction 2 will welcome an exclusive London festival appearance for 2020 from a DJ with a truly global reputation, Four Tet. Known for mesmerising sets that shimmer in the spaces between garage, tuff house and the outer reaches of experimental techno, fans will be excited to see what he has in store for the crowds at Boston Manor Park. 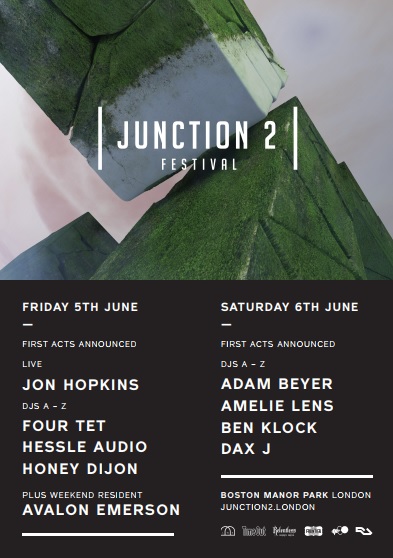 Friday will also welcome one of the most exciting DJs in the world right now, Honey Dijon, who will play her signature Chicago house and disco with plenty of fiery attitude, plus an extended exclusive set from Hessle Audio, a trio who’ve been setting the pace in underground music for over a decade.

Saturday’s line-up, meanwhile, sees the best in techno legends and the most exciting rising stars play. Junction 2 welcomes back its figurehead, Adam Beyer, for his only London festival appearance in 2020. The techno don’s performances have been among the most memorable of the past five years.

Berghain‘s Ben Klock returns to the festival to also play on Saturday to soundtrack the darkest part of the night playing another masterclass from someone adept at manipulating tempo and rhythm. One of the most exciting names in modern techno, Amelie Lens, joins him on the Saturday line-up bringing her unrelenting waves of energy to Junction 2, plus London-born artist Dax J will play his fast, raw club music as part of the 6th June line-up for his only festival set in London for the year.

Junction 2‘s weekend resident for 2020 is Avalon Emerson. There’s perhaps no contemporary DJ who synthesises this sense of precision with an ability to find wildly original dancefloor choices. As a DJ and producer, Avalon has enjoyed a meteoric rise to the top tier of names in the electronic underground. Avalon will spearhead multiple sets in addition to helping curate other respected acts and set the tone for two days of music exploring the spectrum of versatile, dynamic house and techno.

As fans have come to expect from Junction 2, every set is programmed to match the right sounds with the right stages, which includes both beautiful green spaces and stark industrial fragments, where the best handpicked selectors can fully flex their creative range.