Following the recent announcement of the ASOT950 theme (‘Let The Music Guide You’) at Amsterdam Dance Event, the full list of names set to join trance titan Armin van Buuren on 15 February has been revealed.

With party-goers flocking to the Jaarbeurs in Utrecht for the main event, a special pre-party will also take place in Amsterdam on 14 February, headlined by Armin van Buuren himself, as trance lovers anticipate a full weekend of ASOT action.

Growing meteorically as an annual celebration, A State of Trance has become one of the most iconic events on the dance music calendar, with fans from all across the world jetting in for the yearly revelry of all things trance. Led by Trance legend Armin van Buuren, ASOT heralds a collection of the finest purveyors of the genre performing stunning sets to capacity crowds across various stages.

After the Phase One announcement had already confirmed Aly & Fila, Andrew Rayel, Giuseppe Ottaviani, Jorn van Deynhoven, Key4050 and Markus Schulz to play the event at the Jaarbeurs, the ASOT950 cast has now added a further array of the finest trance talent, with Anjuna superstar Ilan Bluestone set to join the celebrations, alongside Scottish prog-trance maestro Grum, and fast-rising psy-trance talent Simon Patterson. 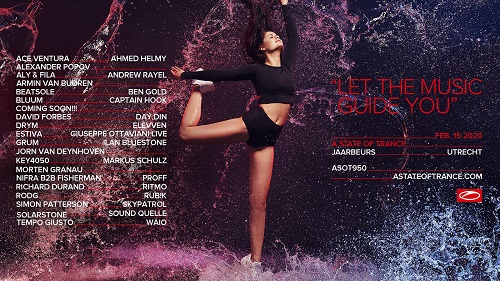 Last year’s edition of ASOT sold out six weeks in advance, and demand for the 2020 event has proven more insatiable than ever before, breaking records as the fastest selling ASOT event of all time!

The last remaining tickets for the iconic event are available via link.