This Thursday, One World Radio is inviting the Dutch DJ & producer Joris Voorn for this week’s Tomorrowland Friendship Mix.

On the eve of the release of Voorn‘s long awaited new studio album called ‘\\\\’ (four) (official release date: November 15), the Dutch techno titan is cooking up something special for Tomorrowland‘s One World Radio.

After almost a year of teasing about his huge project, Voorn‘s new album is set to release this Friday – finding its inspiration in the European electronic scene of the mid-’90s, reflecting the musical journey he has taken over the last few years, exploring his musical roots and breaking new grounds. 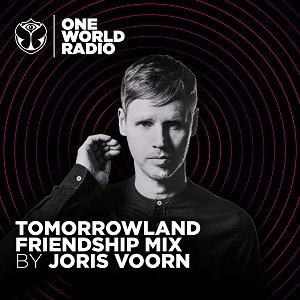 The co-owner of the Amsterdam-based labels ‘Rejected‘ and ‘Green’ is now delivering a very unique and exclusive one-hour guest mix, uniquely curated for One World Radio, spoiling the listeners with plenty of unreleased tracks from his brand new masterpiece.

The Tomorrowland Friendship Mix by Joris Voorn debuts exclusively on One World Radio on Thursday November 14 at 20:00 CEST and will be available after broadcasting online, on the One World Radio app, YouTube, Spotify and SoundCloud.

One World Radio is the official digital radio and content platform of Tomorrowland, available 24 hours a day and 7 days a week with the brand new One World Radio app, online, on YouTube or on TuneIn.

Listeners who tune in to One World Radio will find exclusive mixes, unique tracks, new releases and the most iconic live sets from 15 years of Tomorrowland featuring a range of hosts, shows and specials. All content on the radio station and in the on-demand environment is unique and has been created by the team behind Tomorrowland.

Joris Voorn‘s mix will be available after broadcasting online, on the One World Radio app, YouTube, Spotify and SoundCloud.