Monegros Desert Festival returns for its long-awaited comeback after a five year hiatus. A truly international festival with stages created all over the world, 2020 will see it’s most adventurous edition yet with global artists, spectacular production, unique collaborations and so many surprises still to be announced.

Generations of musical history have unfolded in the Monegros desert, with 2020 marking more than two decades of rave in action.

The show has evolved in spectacular ways since it began 21 years ago; promoting the best in the full spectrum of alternative music – from techno to electronic to the best of today and yesterday’s hip-hop. 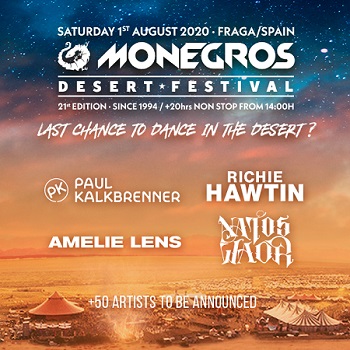 No single timeline can contain its full and one-of-a-kind family history, which started with a simple meeting between friends and ended up being one of the most breathtaking dancefloors on the planet.

On the 1st of August 2020, Monegros Desert Festival makes its comeback powered by a set of unique R.A.V.E principles: Radical, Audio, Visual, Experience, the aim of which is to create a tribute to the riotous raves of the late 80s & 90s.

Expect an unprecedented list of artists, bigger and better production with more than 12 stages designed and curated by collectives from different countries from around the globe as Brazil, Belgium, UK, South Africa, France and Spain.

Headlining 2020’s ‘r.a.v.e.-themed’ edition is the return of the german Legend Paul Kalkbrenner with one of his memorable live shows.

Canadian techno-minimal icon and Monegros festival stalwart Richie Hawtin will also be in attendance, alongside one of the fastest rising DJs on the circuit currently, Amelie Lens.

In true classic Monegros style, Hip Hop will also be centre stage at the festival, with the urban Madrid duo that is Natos & Waor, continuing their “CICATRICES” tour.

For those that have yet to experience Monegros Desert Festival, this is like something you have never seen, non-stop & extreme, this is your chance to forget the outside world and be transported into a techno music haven surrounded by mindblowing scenes & happenings.

Ticekets are avaliable via link.