The year may be drawing to a close but the Creamfields announcements are coming thick and fast as the hype for the 2020 edition continues to grow, as they’ve now revealed their Sunday Steel Yard headliner – Camelphat.

It’s been a meteoric rise for the tech-house duo in recent years and Creamfields has been a constant throughout. Having worked together under various guises over the years, Camelphat first broke through in 2015 playing the festival for the first time that same year.

Since then they have trailblazed their way to the top of their game dropping an arsenal of massive singles along the way, most notably their globally successful and Grammy nominated hit ‘Cola‘ and their recently dropped ‘Rabbit Hole‘.

This, combined with big-name collaborations, non-stop world touring and managing to cleverly straddle the mainstream and the underground has garnered them a global following. 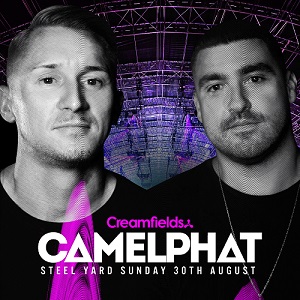 Securing the highly coveted headline slot in the 15,000 capacity Steel Yard superstructure at Creamfields is testament to their success and with a new album in the pipeline for 2020 fans can expect to hear some exclusive new cuts alongside some classics.

Camelphat are the latest act to be announced for Creamfields UK 2020 joining Pendulum – Trinity and Armin van Buuren with the first wave of acts due to be announced next month.