With 3-day loyalty passes having sold-out in just a few days, pioneering new festival experience SAGA is proud to announce the latest batch of names joining an already star-studded billing in Romania next summer.

The latest lineup announcement is headlined by the one and only Tiësto. Cementing a reputation as an icon of the industry worldwide, the multi-platinum selling DJ & GRAMMY-winning producer has pioneered several pivotal landmark moments for dance music throughout the course of his hugely successful career to date, and will mark a Romanian summer exclusive with his SAGA performance.

Taking place in Bucharest between 5-7 June 2020, SAGA – a partnership between global dance leaders ALDA and Insomniac – will welcome a glistening ensemble of talent to the Romanian capital, with Don Diablo, Disclosure, Faithless (DJ Set), Marshmello (only Romanian performance of 2020) and the Bucharest debut of Meduza already confirmed for the summer celebration. 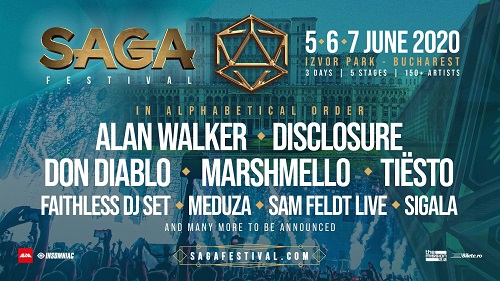 After creating a stir with the announcement of a very special €21 (99 RON) ticket offer, the fresh list of SAGA artists is headlined by global superstar Tiësto. Joining the Dutch maestro in Bucharest will be Alan Walker, the fast-rising Norwegian artist who has rocketed meteorically since breaking through with his 2015 anthem ‘Faded’, which has joined the select group of tracks to break the one billion streams mark on Spotify.

Marking his only summer show in Romania of 2020, Walker will be joined in the latest lineup announcement by tropical house pioneer Sam Feldt. After bringing his unique live show – clad with upbeat trumpets and drums via a full backing band – to the world’s biggest festival stages, he’ll be sure to bring nothing but feel-good party vibes. Packing more names into the stellar Phase Two reveal, British pop-dance master Sigala will also play his first Bucharest show, delivering several of his popular radio hits to the celebration.

Hosting 150+ artists across 5 diverse stages, SAGA party-goers will be on hand to experience the beginning of a brand new era for Bucharest. SAGA will look to bring a fully immersive festival experience to the crowd in attendance, raising the bar for the future.