New artists joining the bill for day one include crowd favourite DJ Koze, who will bring his signature dream-house back to Junction 2 Festival for the third time, while Kiwi brothers Chaos in the CBD make their debut.

Acclaimed producer and DJ Midland will also make his debut on the Friday, while Eris Drew adds her infectious energy to the day one line-up. British DJ and producer Leon Vynehall is also announced with the Ninja Tunes artist bringing his masterfully crafted house music to Boston Manor Park.

As fans have come to expect from Junction 2 Festival, every set is programmed to match the right sounds with the right stages, which includes both beautiful green spaces and stark industrial fragments, where the best handpicked selectors can fully flex their creative range. 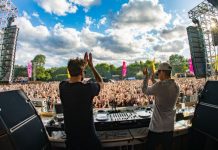