Insomniac unveiled the monumental roster of artists set to perform at EDC Las Vegas 2020, which will celebrate an unparalleled 10 years in Las Vegas.

The world’s largest dance music festival and most anticipated festival lineup of the year features a roster of over 250 of dance music’s most in-demand and diverse all-stars performing Under the Electric Sky.

Throughout the Las Vegas Motor Speedway, which will be utilized in its entirety this year for the first-time ever, nine musical stages will showcase exclusive b2b collaborations, world debut performances, cutting-edge technology, and specially curated 10-year surprises.

Festivalgoers will celebrate from dusk till dawn at the annual three-day event, taking place Friday, May 15 to Sunday, May 17. The lineup of performing artists can be found here.

“In the 10 years since Las Vegas welcomed EDC with open arms, the city has become a second home to me, my family, and many members of our Insomniac team,” says Insomniac Founder & CEO Pasquale Rotella.

“EDC Las Vegas 2020 is the culmination of a decade’s worth of imagination and collaboration, and we wanted to celebrate those achievements with a lineup that represents the musical diversity of this amazing culture. I’m humbled by the milestone and grateful to the community, both local and global, that has supported the growth of EDC” he added. 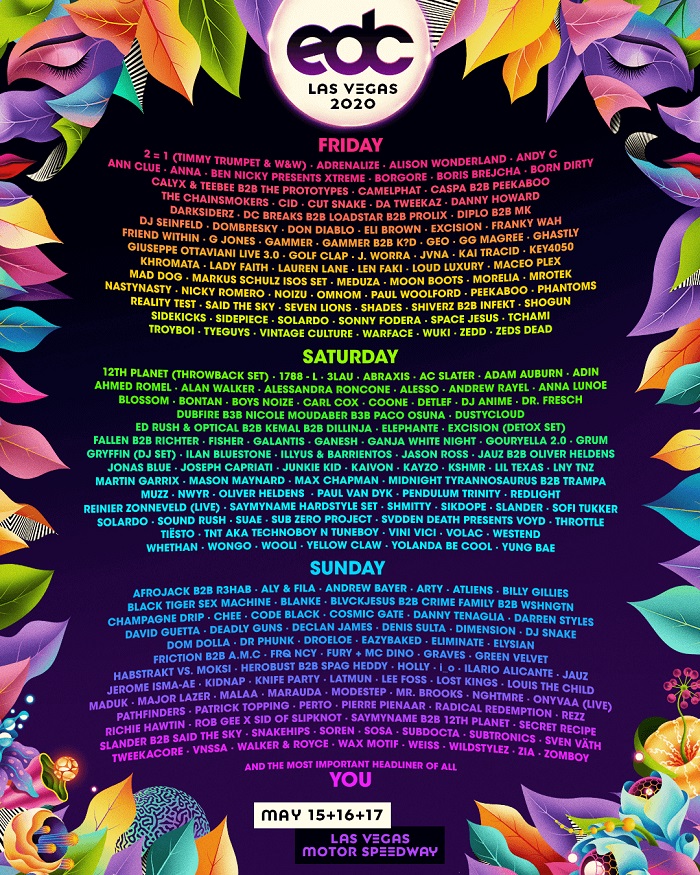 Festival history will be made throughout the weekend as 2 = 1 (W&W and Timmy Trumpet) make their U.S. festival debut, SayMyName and 12th Planet take to the decks together for the first time, and Pendulum Trinity reunites all three members of the group together for their first performance of the new show concept in North America.

EDC Las Vegas 2020 will utilize the largest footprint at Las Vegas Motor Speedway to date, and will showcase elaborate and expansive stage designs throughout the festival, including the largest iteration of kineticFIELD. Across Rainbow Road, Headliners can catch their favorite, larger-than-life live sets during HARD’s weekend-long takeover of cosmicMEADOW. Complete with record-breaking amounts of LED, video tiles, pyro, and laser displays, circuitGROUNDS is back with another new look for 2020.

bassPOD will flex the best in drum ‘n’ bass, dubstep, and leftfield sounds with its world debut b2b performances and the return of a massive, 150-foot magma flame cannon, while neonGARDEN will showcase its offering of techno and underground music within a new, fully-enclosed stage design; its largest ever at EDC Las Vegas.

wasteLAND continues to be home base for the relentless energy of hardstyle and hard dance, while the trance community at quantumVALLEY will enjoy very special collaboration projects and worldwide debuts that you can only hear first at EDC Las Vegas. Curated by the Insomniac Music Group, stereoBLOOM will welcome world-class selectors and future sounds that span multiple genres, and skyLAB, EDC’s dedicated home for house music, will debut as the festival’s 9th and newest official stage.

Yesterday, Thursday, Feb. 20, Headliners were able to interact with Pasquale Rotella, Insomniac Founder and CEO on social media, as he debuted the full lineup during a special “Music Through Music” episode of Night Owl Radio. The live stream featured mini mixes of artists playing each stage at EDC Las Vegas 2020.

Earlier this month, Insomniac revealed the central theme of this year’s festival, kineticZEN. Festivalgoers from around the world will gather Under the Electric Sky celebrating life, love, art and music all while enjoying nightly firework extravaganzas and unique, over-the-top experiences at every corner.

Passes for the 18+ EDC Las Vegas 2020 are sold out. Headliners can join the waitlist for GA, GA+ and VIP passes here.