Insomniac announced the lineup and other details of the next installment in its celebrated Virtual Rave-A-Thon series, Beyond Wonderland at The Gorge, to be held June 20 & 21, 2020.

Even though fans were unable to experience the inaugural edition of Beyond Wonderland at the renowned Gorge Amphitheatre after Insomniac was forced to postpone the festival until 2021 due to the ongoing COVID-19 health crisis, Insomniac will be transporting fans down the rabbit hole virtually through a combination of Alice-in-Wonderland-themed décor and stunning visuals of the scenic venue located in George, Washington.

Since the inception of Insomniac’s Virtual Rave-A-Thon series, more than 50 million viewers across 100+ countries have tuned in. Past Rave-A-Thon performances are archived on the Insomniac Events YouTube. 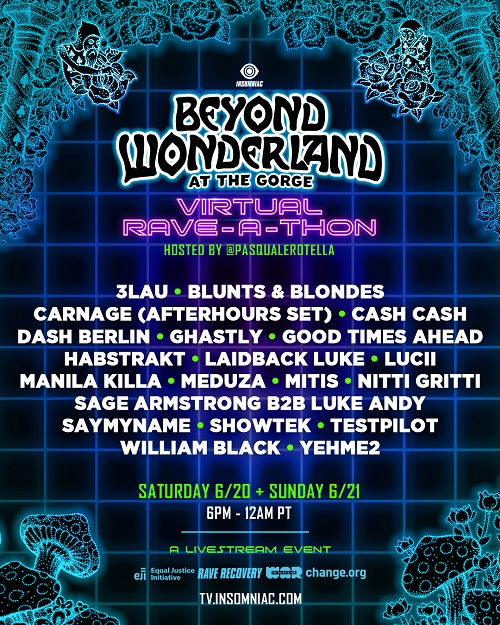 The Beyond Wonderland at the Gorge Virtual Rave-A-Thon will benefit the Equal Justice Initiative, a non-profit organization committed to ending mass incarceration and excessive punishment in the United States, to challenging racial and economic injustice, and to protecting basic human rights for the most vulnerable people in American society, and Rave Recovery, a relief fund created specifically for dance music fans impacted by the COVID-19 health crisis.

Donations can be made now via eji.org and insomniac.com/rave-recovery, respectively, and donation links will be live on Insomniac‘s YouTube and Twitch channels during the Beyond Wonderland at the Gorge Virtual Rave-A-Thon livestream, scheduled to take place from 6pm – 12am PST each of the two days.

Artists who will be performing during the Virtual Rave-A-Thon include:

Insomniac will continue to release new and original content via its YouTube channel throughout the coming weeks, including new episodes of its Golf Cart Confessions interview series, filmed backstage at various Insomniac festivals in 2019.