EDM DJ and producer, Steve Aoki is back with a remix of J-pop artist, Kyary Pamyu Pamyu’s Japanese No.1 platinum-selling single, ‘Ninja Re Bang Bang’ released on Smash The House.

The spectacular fusion of Kyary Pamyu Pamyu and Steve Aoki on this sugary J-pop-dance track delivers a technicolor extravaganza that is brimming with the larger-than-life personalities of two of music’s most distinctive superstars. The Japanese pop queen’s original song reimagined by EDM’s supercharged hit-maker producer is something so overly eccentric that it will have you vividly fall in love with ‘Ninja Re Bang Bang’.

Bringing his trademark energy, Aoki‘s remix triggers the pace of the record from the opening few bars which lifts into an almost immersive vibrancy of cosmic sounds. Steve Aoki‘s rendition of ‘Ninja Re Bang Bang‘ swings in favour of a speedy melodic vibe that is hyper-catchy and ties effortlessly with Kyary‘s cute vocals. 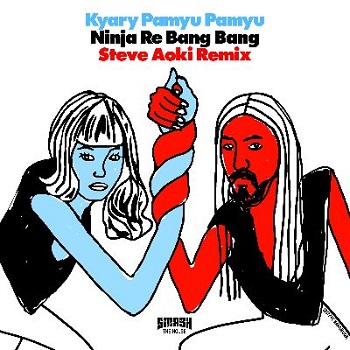 First released in 2013, ‘Ninja Re Bang Bang‘ has become a worldwide phenomenon with over 65million YouTube views to date. The track was also featured on animated movie ‘Sing’ featuring Matthew McConaughey and Scarlett Johansson and the latest John Wick movie: Chapter 3 – Parabellum. It is also confirmed to feature in the TV commercial and end theme for the forthcoming video game cartoon animation, Ninjala.