Music lovers the world over were overjoyed to hear the release of David Guetta & Sia’s new collaboration on Warner Music, ‘Let’s Love’, which has passed over 20 million streams in just over two weeks, charting at #16 on the Shazam Global chart, trending at #15 at European radio, and picking up over 550 million views on Tik Tok.

It’s the latest in Guetta & Sia‘s 2 billion+ times streamed catalogue of hits which also includes ‘Titanium‘, ‘She Wolf (Falling To Pieces)’, ‘Bang My Head‘ and ‘Flames‘.

The video brings the message of the song to life, leaving one to wonder whether escaping the daily reality might be easier by submerging ourselves in a digital world that could bring us back to the glorious 80s. 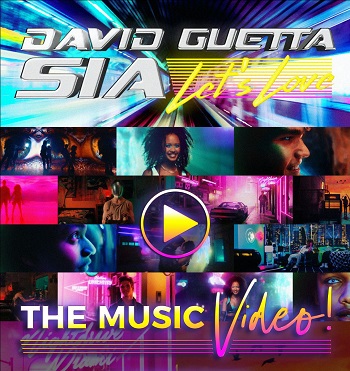 Shot and directed by Hanna Lux Davies — who created previous videos for Guetta including ‘Hey Mama‘, ‘Don’t Leave Me Alone‘ and ‘Say My Name‘ — it’s a visually-stunning and heartstring-pulling tale of modern, unprejudiced romance. Telling the story of two people who meet in a virtual gaming world to celebrate their love for each other, the video sees the pair thrown into an ’80s video game-themed adventure, full of neon lighting, vibrant clubs and future-retro cityscapes.

A clever twist adds a touch of sweetness to the story as we watch the characters navigate the difficulties of their home life and the obstacles in the way of their love. It makes for a beautiful watch and brings the song to life in vital fashion.