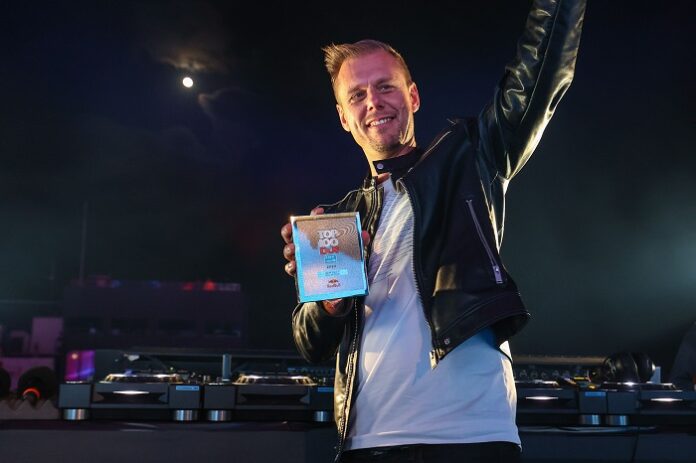 So much time has passed since Trance legend Armin van Buuren first entered the DJ Mag Top 100 DJs poll at #27 in 2001. Then mostly renowned for genre-shaping Trance tracks such as ‘Blue Fear’ and ‘Communication’, the now five-time #1 DJ in the world went on to become one of the most reputable and consistent individuals to have ever graced the electronic music space.

Throughout his twenty-plus-year career, he managed to embrace new sounds, developments, directions and tastes without straying too far from his roots. This tireless dedication has more than paid off; the DJ Mag Top 100 results of 2020 slotted the Dutchman in at #4 as the highest-ranking Trance DJ, his twentieth consecutive ranking and nineteenth consecutive Top 5 spot in DJ Magazine’s long-running popularity contest. This year’s Top 100 DJs was unveiled earlier this evening through a special livestream from Circuit Zandvoort, hosted by AMF (Amsterdam Music Festival).

Armin van Buuren: “It feels a bit unreal to be honest. It’s a bit of a cliché, but the thought of ranking in the DJ Mag Top 100 for twenty years in a row never even crossed my mind when I was first included in the Top 100 about twenty years ago, not even as a bucket list wish.

I’m of course thankful for the fact that I’m still here doing what I love after all this time, but above all else, I’m beyond grateful for the unwavering support from my fans. The way I see it, this is as much their achievement as it is mine. Maybe even more so.”

His latest single, ‘Feel Something‘ featuring Dutch EuroVision Song Contest 2019 winner Duncan Laurence, is a perfect example of how Armin van Buuren continues to innovate and stay ahead of the curve. Reflecting on the pain of heartbreak on a backdrop of gritty beats and touches of synth pop, ‘Feel Something‘ is designed to tick the boxes of every single dance music lover out there.

The single also puts additional emphasis on Armin van Buuren‘s versality as a passionate creator. In between his recent dance-pop releases, his techno-tinged collabs with rising star AVIRA and his genre-defying work as one half of GAIA, the electronic music flagbearer stays mindful of his roots by continuing to cultivate a massive global following through his weekly A State Of Trance radio show, event series and album series, just like he did when he first started his journey over two decades back.

The radio show is rapidly approaching the incredible milestone of 1000 episodes as well, symbolizing the unparalleled devotion he has shown to his craft and his legions of loyal fans. Armin van Buuren evidently stands tall as a true electronic music giant, and his twentieth consecutive ranking in the DJ Mag Top 100 DJs poll is testament to that.

Listen to his latest track “Feel Something” below!