Following on from remixes courtesy of Loods and Roosevelt, and Purple Disco Machine‘s own Club Dub Mix, now the acclaimed producer and hotly tipped British newcomer Sophie of Sophie and the Giants team together on the stunning video of the Acoustic version for the international hit single.

Directed by Louis Ellison, the video was shot in two locations with Sophie filmed at Omeara in London, and Purple Disco Machine filmed in the Delft Theatre in Berlin. Capturing a whole new personality into the hit song, the video carries an incredible live performance and brings the lyrics to life for an emotional three-minute watch. 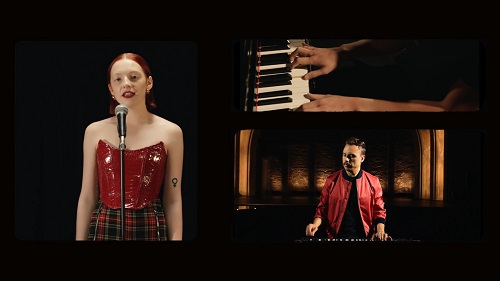 Winning the hearts of fans the worldover, the single is continuing to build momentum, having garnered over 110 million streams, whilst reaching a peak of #9 on the Global Shazam Chart, #3 on the European airplay charts, and recently accredited double platinum in Italy following a standout performance on Italy’s famous Power Hits Summer broadcast live from the Verona arena. Purple Disco Machine and Sophie and the Giants‘ acoustic rendition of ‘Hypnotized‘ is out now.