Carl Cox, Sasha and Kevin Saunderson are just some the stars of the electronic music world taking part in the Set For Love livestream which is being broadcast on Beatport this Friday 20th November. The ten-hour mixing marathon will be on Beatport’s Twitch channel starting at 3pm – 1:00 am GMT / 4pm – 2am CET / 10am – 9pm EST.

The event is an initiative by the charity Last Night A DJ Saved My Life (LNADJ) and will be raising funds over the weekend of World Children’s Day to support children in developing countries. 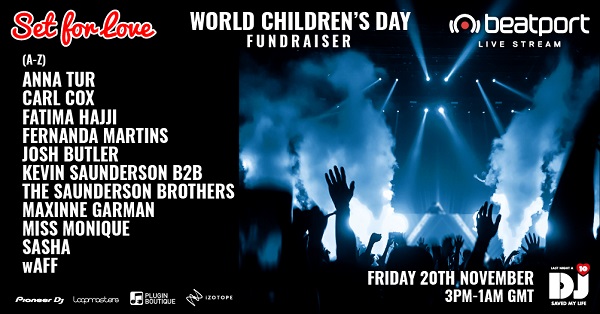 The charity fundraiser includes the almighty Sasha playing from an iconic Ibiza location, Carl Cox sharing a Set For Love from Australia and Detroit techno pioneer Kevin Saunderson bringing a world exclusive of his new project, “The Saundersons“. Kevin will be playing back to back with his sons “The Saunderson Brothers” with his wife Ann Saunderson performing vocals.

Kevin said, “This is what music is all about, bringing people together for the greater good. I’m looking forward to playing alongside Carl Cox, Sasha and my musical family again, all the way from Detroit.”

Carl Cox said, “I’m happy to play a Set For Love for World Children’s Day on Beatport. Please check us out this Friday 20th November and support the cause, it’s going to change a child’s life forever and all the while having fun with the music we’re playing. Let’s make this one the biggest it can possibly be!”

Sasha said, “I’m happy to support this great cause with a Set For Love. It feels good to see music bring people together, especially after the tough year everyone has had. You can catch my set this weekend alongside Carl Cox and Kevin Saunderson.”

Funds raised will go to support grassroots projects in developing countries including Tanzania, Uganda, The Philippines and Nepal. These projects are focussed on creating a sustainable future for children, young people and their families and will be delivering food and water, education, safety and trauma rehabilitation.

So far, more than 700 DJs from over 50 countries have registered to play their own Set For Love during the weekend and will be participating in what is potentially the world’s largest simultaneous livestream event. DJs of all abilities are invited to get involved and can register to play their Set For Love at the link. Donations can also be made through that link.

Participants are reaching out to their followers, friends and families to ask for donations, helping LNADJ demonstrate that the power of music really can make a difference to the lives of those who need it the most.

This will be the third Set For Love event organised by LNADJ and organisers are hoping it will be the biggest one yet. The previous two held earlier in the year raised over £80,000. These funds, raised for the charity’s Covid-19 Relief Appeal, provided food, water and medical supplies to vulnerable communities in developing countries.