Tomorrowland’s second virtual festival starts at 20:00 (8pm) local time in all time zones in the world with performances by more than 25 of the planet’s best DJs and producers across 4 digital breathtaking stages.

There’s a special countdown at midnight featuring dazzling fireworks in every time zone, ensuring that people can ring in the new year in style, no matter where they are located.

Allowing the People of Tomorrow to close off 2020 and celebrate New Year’s Eve with Tomorrowland and people from all corners of the world, the creative team and 3D artists behind the festival have created a spectacular and immersive experience in an entirely new and dazzling entertainment location consisting of 4 magical worlds, in which some of the festival’s most iconic themes will be used.

Fans across the globe have plenty of choices on who they can dance into the new year with when the clock hits midnight: CamelPhat (Atmosphere stage), Dimitri Vegas & Like Mike (Melodia stage), Diplo (Planaxis stage) or Brennan Heart (Pulse stage).

The People of Tomorrow can start off their evening by exploring the 4 mesmerizing and meticulously designed digital stages, enjoying the sounds of ARTBAT and Meduza at the Atmosphere stage; David Guetta, Lost Frequencies, Major Lazer and Martin Garrix at the Melodia stage; DJ Snoopadelic, Duck Sauce and Tchami at the Planaxis stage; Coone, Da Tweekaz and D-Block & S-te-Fan at the Pulse stage – all from the comfort of their home – counting down the hours until the start of 2021. 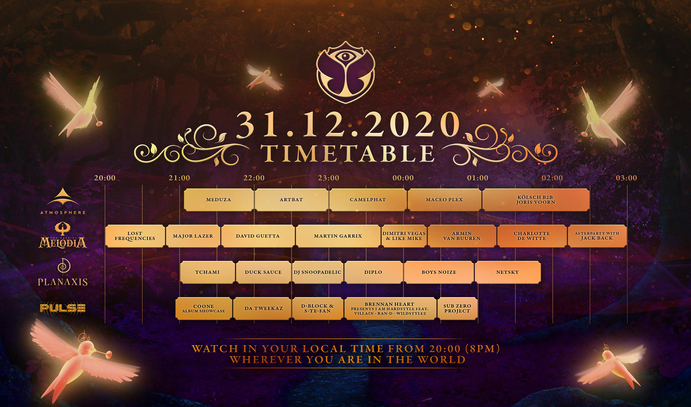 The party doesn’t stop at midnight: Superstar DJs such as Armin van Buuren, Boys Noize, Charlotte de Witte, Kölsch b2b Joris Voorn, Maceo Plex, Netsky and Sub Zero Project will have people around the world dancing into the late hours – there’s even a special afterparty to keep them going with music by David Guetta’s underground alias Jack Back.

I’m going to play so much unreleased music and I really want to take people on a journey, playing some different sounding stuff and new things – I want it to be more of an experience.”

“I’m expecting Tomorrowland to take things to the next level – it’s going to be even more impressive and detailed. It’s a great way to connect people and I really like the fact that Tomorrowland always incorporates lots of nature effects, this always brings something magical together with the music.

I want to tell a very good story and represent the music that I stand for. I’m playing some exclusive tracks and unreleased stuff – techno music with some trance influences. It’s going to be a high energy set, it’s New Year’s Eve and people want to party – I hope they will go crazy!”

Danish techno legend Kölsch and Dutch techno titan Joris Voorn will be treating fans to a unique b2b set at the Atmosphere stage:

“We’ll only be playing our own music – brand-new and made in the last half year – which will create a really exciting atmosphere on stage. Especially the fact that we haven’t even heard each other’s music that we’ve been making generates a different type of energy. We’ve seen a little sneak preview of the stage and it looks pretty insane – we immediately thought of a spaceport.”

Belgian drum & bass pioneer Netsky will be playing at the dazzling Planaxis stage:

“It’s almost hard to not have your hopes high with Tomorrowland, because every time you know you’re going to see something that will blow you away. I’m sure that in a week’s time, they’ll add fishes and massive whales behind me, which is incredible – I can’t wait to see this on a big screen myself. Everybody is working day and night in the next weeks to make this work, it’s an amazing effort.”