It was ten years ago when David Guetta dropped the now iconic smash hit ‘Memories’ featuring Kid Cudi which has over 326 million streams and more than 375 million views on the official music video.

A decade later, TikTok users are breathing new life into the track as young people find solace in the lyrics amid the pandemic. Close to a million videos have flooded the social media platform as energetic TikTok users and stars alike depict their own interpretation of the lyrics and the relevance of ‘I just wanna let it go for the night, that would be the best therapy for me‘ in these times. The videos have combined over 1.6 billion views, watch here.

The outpouring of love for the original led Guetta to release a stunning new remix which has already been well received after teasing it during his NYE livestream performance at the Louvre in Paris.

Last week, Memories was the most streamed track out of Guetta‘s catalogue which spans 20 years and billions of streams. The original is amassing over 6 million streams a week and is charting on Shazam worldwide, meanwhile the track features in close to a million TikTok videos with over 50 million combined views. 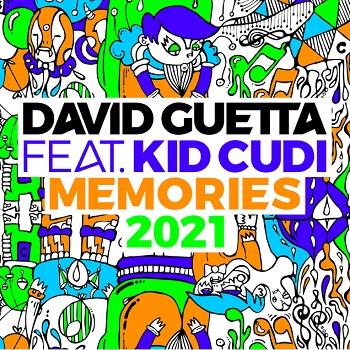 David Guetta celebrated NYE with his third United At Home livestream as 20 million people from across the globe tuned into a stunning performance in front of the most iconic museum in Paris, the Louvre.

The global producer/DJ sensation showcased the iconic museum in a way like never before with 450 light spots, 2 drones, a 70-minute music set and 150 people working around the clock to make the event possible. After one of his biggest years to date, being named the world’s best DJ by the DJ Mag Top 100 poll, raising millions in COVID-19 relief, breaking a Guinness World Record for the most-watched DJ set on Facebook after amassing 50 million views on his United At Home shows, 2021 is already off to a phenomenal start. The Memories remix is out now via Warner Music.