Fresh from reaching the milestone number of a thousand episodes with A State Of Trance a few weeks back, Armin van Buuren has teamed up with American broadcasting company SiriusXM to start a new full-time streaming channel: ‘A State Of Armin’.

Broadcast exclusively across the United States, the brand-new dance music show will feature the best selections in new and upcoming trance and progressive dance music, as well as classics from both Armin van Buuren and his collaborators from over the past twenty years.

In addition to the pristine track selection of the five-time #1 DJ in the world, the new channel will also broadcast A State Of Trance. The long-running weekly show grants listeners the opportunity to hear Armin van Buuren debut new and exclusive music and DJ sets from his radio studio in Amsterdam and from festivals around the world, reaching 40 million listeners from over 80 countries on a weekly basis. 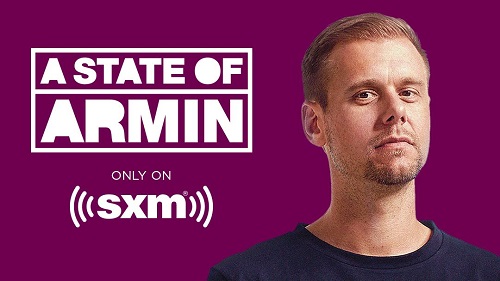 Here’s what Armin van Buuren had to say about it: “Part of the reason why I’ve been around for so long is because nothing beats the feeling of sharing the music you love with as many people as possible.

I’m grateful that SiriusXM is giving me the opportunity to reach even more people through this new full-time streaming channel. It’s proof of the amazing relationship we have and I can’t wait to show my US fans what A State Of Armin is all about!“