This month, Bucharest was to welcome DJ and producer Armin van Buuren to Constitution Square, Bucharest for one of his biggest European solo shows to date, “Sound of Bucharest”. Sadly, due to the rising number of Covid-19 cases in the Romanian capital, event organisers ALDA and Bucharest Town Hall have come to the decision to postpone the show until 24 September 2022.

Back in June, the Sound of Bucharest concept was well received, as one of the worlds most beloved artists, Armin van Buuren, joined Allan Hardenberg and the mayor of Bucharest to unveil the revolutionary new music event. With the potential of seeing one of their favourite artists again, the anticipation had been building amongst fans ahead of the first edition of the event, originally scheduled to bring them joy on 25 September this year.

Having dedicated an entire year to organising the show, ALDA considered every measure possible to ensure the event could go ahead safely, but circumstances have been taken out of their hands. The world we are living in today still offers up terrific challenges and a rise in Covid-19 cases in Bucharest caused concern ahead of Armin‘s joyous return to the city. The safety of ticket holders remains ALDA‘s top priority and, therefore, the organisation believed it in the interest of everyone involved to postpone the event until next year. 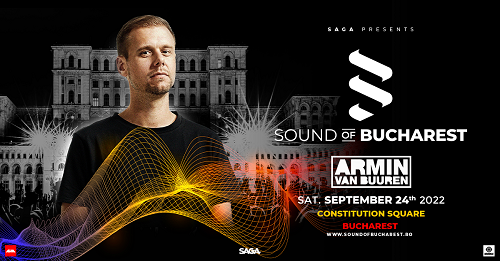 “Romania, I was so excited to see you again & feel your beautiful energy! But it is what it is & we have to look forward no matter what happens, while keeping everybody safe. Let’s make each other a promise: we will meet next year and create together a show that will be remembered forever. Take care & stay safe until then!” – Armin van Buuren said, addressing his fans following the news.

Despite his disappointment, the Dutchman still looks forward to reconnecting with his loyal fans in what will be a very special show in Romania next year. The trance music titan and multiple winner of the No.1 DJ title, still craves that incredible feeling of performing in front of the Bucharest fans for the first time in 7 years, ensuring the event is an unmissable one. Looking toward the future, leading concept developer ALDA aims to bring the Sound of Bucharest back to Romania every year, with other major international artists set to follow in van Buuren’s footsteps in years to come.

All current ticket holders who register for 2022 will be guaranteed tickets for next year’s show. Fans can register now via the link. The biggest European solo show, Sound of Bucharest, will champion Armin van Buuren next year on 24 September 2022, in Constitution Square, Bucharest.