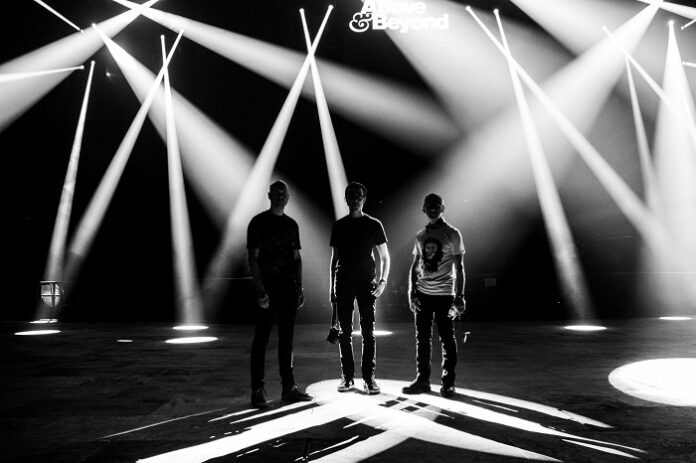 Above & Beyond share their Deep Mix of ‘Almost Home,’ their most recent single and first joint effort in over four years with long-time collaborator Justine Suissa.

‘Almost Home’ was Above & Beyond’s first club track of 2021, arriving just in time for their Group Therapy 450 milestone show at The Drumsheds London in early September. The trio premiered their deep mix of ‘Almost Home’ in their warm-up set for Group Therapy 450, recorded in Hackney Canal, London. Group Therapy 450 was Above & Beyond‘s first headline show in over a year, with the band performing to 10,000 fans in person, plus tens of thousands more online. Both sets have been uploaded to YouTube, racking up nearly a million views in less than a month.

Jono, Tony, Paavo, and Justine have been working together since 2000 when they formed the group OceanLab. In 2008, they released their first and only album ‘Sirens Of The Sea,’ a record that has gained near-mythical status among trance fans. More recently, Above & Beyond and Justine have collaborated on club hits like ‘Alright Now’, ‘Cold Feet’ and ‘Another Chance’, and emotive, downtempo records like ‘Little Something’. In 2016, Justine joined Above & Beyond during their sell-out ‘Acoustic II’ tour, which stopped at iconic venues like the Royal Albert Hall in London and The Hollywood Bowl in Los Angeles.

The Original Mix of ‘Almost Home’ has been on frequent rotation across SiriusXM BPM and iHeart Evolution, and has been supported by the likes of The Chainsmokers, Armin van Buuren, and Oliver Heldens.

‘Almost Home’ (Above & Beyond Deep Mix) is out now on Anjunabeats. Above & Beyond embark on their Anjunafamily Reunion Tour this autumn, visiting Red Rocks Amphitheatre for two sold-out shows, the world-famous Echostage in D.C, and more.

Above & Beyond teams with Cercle for a historical live-streamed event

Above & Beyond and Justine Suissa share their first joint effort in over 4 years, ‘Almost Home’

Above & Beyond deliver their first original instrumental track of 2021...