Two greats of the Dutch techno scene unite for a fourth time as HI-LO and Reinier Zonneveld unleash the mighty ‘String Theory’ on an unsuspecting world. Following in the footsteps of ‘Saw Of Olympus’, ‘Balearic Mornings’ and ‘Existencia’, it’s another huge slice of cutting-edge techno.

Recalling classic Dutch tech-trance in its groove, ‘String Theory‘ is driven by a murky pulse of sub bass, tough-as-nails kicks and crisp hi-hats and claps. A rolling arpeggio menacingly snarls and rasps, building its darkly-tinged chord progression before a classic string sample teases into focus.

The string melody is based on the theme from Alfred Hitchcock‘s legendary 1960 film ‘Psycho‘, composed by Bernard Herrmann. His score for the film was ranked #4 on the American Film Institute’s 25 Greatest Film Scores poll, and his family approved the use of it in ‘String Theory‘. 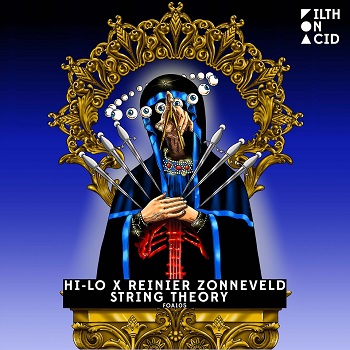 The strings are quickly snatched out of the way as the arp grows gruffer and rougher and snare rolls build the intensity. In drop 16th-note hats and cymbal rides to propel the track higher, the strings brilliantly gated into an irresistible rhythm. The breakdown lets the strings unfold in their full glory, on-beat claps pounding the beat as filters and reverbs do the rest. It’s a stunning track that will be a highlight in any set it’s dropped in, and yet more justification for the ongoing collaboration of these two brilliant minds.

Both artists have had an incredible year despite the many challenges facing the music industry. Reinier sold out 13,000 tickets for his solo headlining 10-hour long Awakenings show during ADE—a rare feat for a techno artist. He also made his entrance in the Alternative DJ Mag Top 100 and his label Filth On Acid is continuously claiming the number one spot on and off as the best-selling techno label on Beatport. HI-LO meanwhile has had a release on Adam Beyer‘s Drumcode this year, and several releases on Filth on Acid — the 2 most influential techno labels in the world at the moment.

He also remixed tracks for the likes of Nina Kraviz, collaborated with Will Clarke and T78 and received heavy support from other underground scene luminaries like Pan-Pot, Joseph Capriati, Enrico Sangiuliano, ANNA and Joris Voorn to name a few.
Out today, ‘String Theory‘ arrives just in time for peak festive season and a whole lot of kitchen raves. How’s that for a Christmas present? 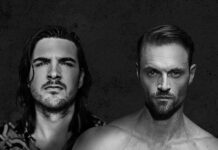