Superstar DJ and producer, David Guetta has unveiled an exclusive crate-digging video exploring formative records that shaped him as a DJ.

The 15-minute visual sees the French maestro hand-picking a selection of records from his collection and enthusiastically describing their importance to him. Some of the tracks featured include the Masters at Work classic ‘WORK’, which he confesses to being scratched given the amount of times he has played it, seminal Chicago house cut ‘Love Can’t Turn Around’ by Farley Jackmaster Funk and ‘Your Love’ by the late, great Frankie Knuckles. Essential viewing for dance music lovers everywhere.

It follows recent singles ‘redruM’ with Sorana and ‘Permanence’ with MORTEN, and a show-stopping live stream set from the stunning Louvre Abu Dhabi on New Year’s Eve where over 50 million fans tuned in worldwide to watch the unforgettable set. 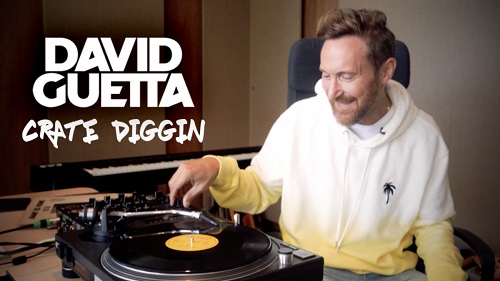 Receiving no fewer than three nominations this year for the 2022 Brit Awards, Guetta is up for two ‘Song of the Year’ awards, for ‘Remember’ with Becky Hill and ‘Bed’ with Joel Corry and Raye, as well as a ‘Best International Song’ award for ‘Heartbreak Anthem’ with Galantis and Little Mix. Looking ahead, Guetta is set to perform at a slew of suitably high-profile clubs and festivals in the coming weeks, including ULTRA Miami, Brooklyn Mirage, Lollapalooza in Paris, as well as residencies in Las Vegas and Ibiza.