There are few names in dance music that command as much reverence as Armin van Buuren, the Dutch DJ/Producer has been at the top of his game and the king of the trance scene for over two decades, and been ranked the worlds #1 DJ a record five times by DJ Mag.

A regular headliner on the UK festival scene, this Easter Bank Holiday weekend he makes his long-awaited return to Manchester after a 5-year hiatus, taking over the cavernous Mayfield Depot for the very first time.

Cream and WHP come together for what is set to be an unmissable show in one of the UK’s best event spaces. The former railway station, built in the late 1800’s showcases Manchester’s industrial past and is the current home of The Warehouse Project, which has seen some of the world’s biggest electronic artists perform.

On Saturday 16th April, the highly anticipated return of the Armada Label boss and Grammy-nominated flag bearer of the trance movement will give fans the chance to experience the full energy and production he has become lauded for in one of the best clubbing institutions. 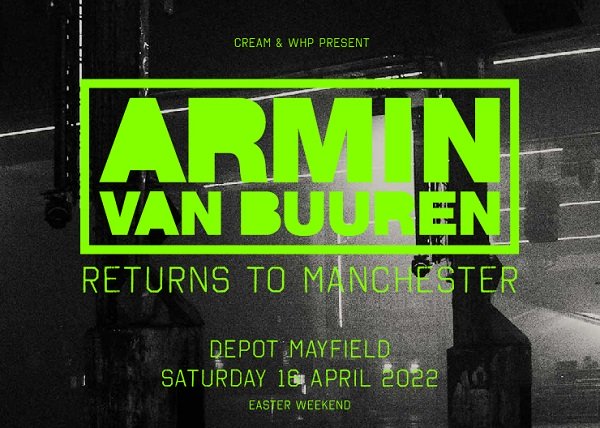 “I am beyond excited to announce I’ll be returning to Manchester this Easter holiday for a very special show. It’s been over 5 years since I last performed there, and this will be my first time playing at the Depot making it even more special. This has been a long time coming, so who’s ready for it?”