Fresh from being the first major international festival to take place successfully after the pandemic, Serbian super-festival EXIT returns in 2022 with it’s strongest edition yet.

Heading up the 2022 edition of EXIT with Nick Cave and needing no introduction is the most successful DJ in history, internationally renowned DJ Calvin Harris, who is sure to bring his infectious party energy to eager EXIT crowds. The producer, DJ and songwriter stands as the figurehead for modern dance music, having broken world records and dominated the charts. He has over 35 billion combined audio and video streams in his career history, making him one of the most viewed artists on YouTube and one of Sony Music’s biggest streaming artists. Calvin has collaborated with global artists including Frank Ocean, Pharrell Williams, Rihanna, The Weeknd, and Travis Scott to name a few. His work has garnered a number of top music awards and nominations, including 14x MTV VMA nominations and 2x wins, 5x Grammy nominations and a 2013 Grammy Award win in the Best Music Video category for “We Found Love”. 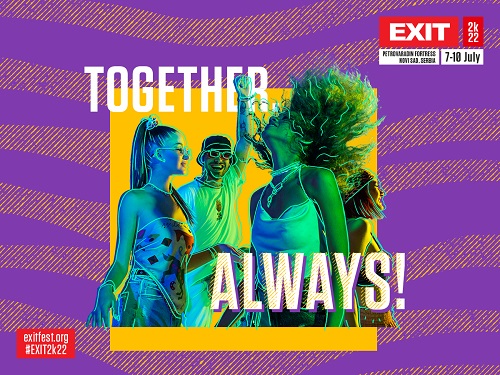 Across the festival other stages will feature the likes of Marky Ramone, Djaikovski, She Past Away, Bury Tomorrow, Discharge, Incantation, Moscow Death Brigade, Nervosa, Tankard and numerous other local and regional acts.

“The fact that we successfully organised the first major festival in the world after the pandemic gives us great confidence and optimism for 2022. Last year’s edition also gave us a huge boost in terms of visitors and media, so we decided to further raise the level of line-up and to offer audiences around the world one of our strongest and most diverse editions ever.”

EXIT is a critically-acclaimed music festival from Serbia, and a multiple winner at the EU Festival Awards. In its rich 20-years history, EXIT has hosted many massive music legends such as The Cure, The Prodigy, Guns N’ Roses, David Guetta, Sex Pistols,Grace Jones, Arctic Monkeys, Peggy Gou, The Killers, Carl Cox, Avicci, Nina Kraviz, and many others.

Tickets and more info at the link.