Roweglia and elrow family have some exciting news for elrow Town London lovers! elrow Town returns to London, bigger and craziest than ever!

We can finally announce that elrow Town will be first opening its doors to curious revellers in Parsloes Park, East London on Saturday 20th August!

After 2 years of absence and the huge success of the elrow Town 2019 celebration, Roweglia is back after an extended trip to visit her old British friends this summer.

Excited and inspired by all she has seen on her travels she wants to show you her craziest self-expression, through the most colourful characters, different and massive stages, the most significant artists in the electronic music scene and the wildest festival you can ever imagine.

The line-up is yet to be revealed, although there will be upwards of 50 DJs in attendance, with a musical focus on house, disco & tech-house.

elrow Town London promise to turn it up yet another notch this year. In the words of elrow founder & CEO Juan Arnau, “we are back stronger than ever, this year will be our best year. If you want to have fun, this is your festival in London!“.

elrow Town London is a collaboration between between Spanish immersive party concept elrow and leading London events team LWE. Their debut show took place on the 19th and 20th August 2017, hosted across two days at the Queen Elizabeth Olympic Park and combined three elrow themes in one space, with Singermorning, El Rowcio Presents: Feria de Abril and Rowlympics all featured. Headline sets came from the likes of Fatboy Slim, Seth Troxler, Idris Elba, Jamie Jones, Eats Everything and Hot Since 82.

Don’t miss the opportunity to meet Rowgelia in a one-off special show and get ready for:

new elrow themes – never seen before in the UK! 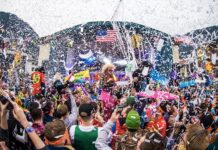