Some of the biggest names in dance music have contributed to a brand-new remix package for David Guetta, Becky Hill and Ella Henderson’s collaborative smash single ‘Crazy What Love Can Do’.

The star-studded, eight-track release features a brand new version from platinum-selling don James Hype, who links up with Guetta himself for a shimmering big room club remix, centring around an invigorating bass line and injecting a dose of deeper, darker dancefloor energy into the track.

EDM powerhouse A7S centres his rework around scintillating drops while Brazilian talent Öwnboss’ club destroyer of a remix continues to crank up the dancefloor energy, having been released as a single last week. 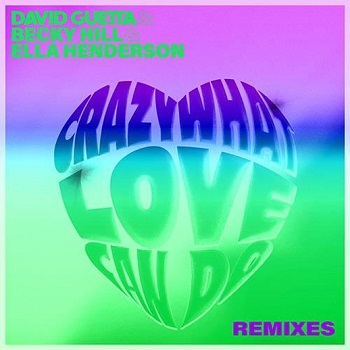 Elsewhere, Bristol D&B favourite Grafix injects some slick, breakbeat euphoria with his version, and FFRR-affiliated James Carter opts for a sleek, bassline-driven take before exciting young duo HEADER close out with a high-energy remix, laden with the nastiest of drops.

A certified smash that’s already surpassed 100 million global streams, ‘Crazy What Love Can Do’ is currently sitting at #13 in the UK ‘Top 20’, after reaching #2 and #6 on the iTunes UK and Global iTunes charts respectively. This follows early support from the likes of BBC Radio 1, MTV UK and numerous other tastemaker platforms.

This ‘Crazy What Love Can Do’ remix package is a riotous ensemble of A-list talent and fast-rising future stars.