Launched in October this year the Beams has welcomed the world’s finest dance music artists and labels to London’s newest dedicated culture space. The closing show in the AW22 season will continue this world-class level of talent with a double headline show from The Martinez Brothers and Skepta (DJ Set)

Having started his musical path as a DJ and MC for his brother JME, Skepta has recently gone back to his roots with a highly-anticipated DJ set at the legendary Circoloco party at DC-10, Ibiza. Exploring a different side of his musical identity, the London-based artist promises to surprise the audience with his unique take on dance music. Well versed in the world of electronic dance music from his days guesting on various London pirates or hosting at legendary clubs like Plastic People, Skepta will be sure to enthrall the crowd as he brings his own unique focus to club culture.

Two of the most sought after and talented artists to emerge from New York, Bronx-born DJs and producers The Martinez Brothers are no strangers to large scale club crowds, having performed at the world’s biggest and best clubs and festivals throughout the last decade. With their label imprint Cuttin’ Headz going from strength to strength, the brothers will be set to join forces with Skepta for a transatlantic exploration of modern dance music.

Co-headlined by the equally inimitable The Martinez Brothers, the three DJ’s will helm a unique tech-house orientated event that will play host to the first event from Skepta-affiliated house brand Más Tiempo. Supported by some extra special guests TBA, the last event of the year will bring in some new and seasoned talent to see the season out in style.

The Beams‘ 55,000 square-foot warehouse space, which is located in East London’s industrial district, is unlike anything else the city has to offer and provides an unparalleled audio-visual experience that has to be seen to be believed.

With Broadwick Live and LWE currently co-hosting the space, the Beams still has plenty to offer with seven events left of the current season, there is still plenty of time to witness world-renowned talent before the Beams shuts up shop for the rest of the year before launching its culture programme. 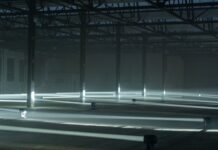